Studies have shown new generation anti-depressants have little clinical benefit for most patients, research suggests. Rather doctors fear that a malfunction at pharmaceutical companies may have led to anti-anti-depressants being prescribed to clinically depressed patients. 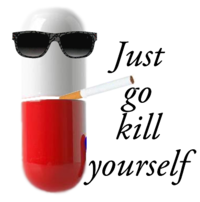 The tell-tell signs of an anti-anti-depressant

The number of prescriptions for anti-depressants hit a record high of more than 31 million in England in 2006 - even though official guidance stresses they should not be a first line treatment for mild depression. This means the only people to gain additional depression from this fiasco are the ones who are already clinically depressed.

Some conspiracy theorists claim this is a government initiative to cleanse Britain of depressed people by suggestive suicide. Others suggests it was just a big mix up.

In fact, it is alleged that a group of students from the university of Hull are partially, if not totally, to blame for this. Prof Kirving Irsch told reporters;

"There seems little reason to blame this all on us, I mean it was probably just a prank by first years,or something."

Prof Irsch is expected to resign.

Patients are strongly advised not to stop taking their medication without first consulting a doctor, which seems to nod towards the conspiracies placed forward.

However, Alan Johnson, the Health Secretary of the United Kingdom has announced that there is little cause for alarm amongst anti-depressant users.

"The replaced drugs are almost the same, except they make you more depressed, not less."