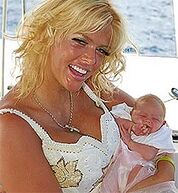 Sadly no breastfeeding pics were available.

Los Angeles, CA. In a historic first, Uncyclopedia, the world's leading satirical online encyclopedia, has been out-satirized by Real Life catching up with it.

Since as far back as 16th February 2007, Uncyclopedia has been listing renowned murderer OJ Simpson as one of the men claiming paternity for the daughter of Anna Nicole Smith. However, in a bizarre turn of events, OJ Simpson has today shamelessly ripped off Uncyclopedia by claiming that this was, in fact, true.

OJ after being arrested for (supposedly) impregnating Anna Nicole Smith

"What can I say?" said OJ. "Yes I was at Anna-Nicole's house on December 7th 2005, with all the other thousands of potential claimants - and thus I have a perfect alibit for any other murders that happened that night elsewhere in Los Angeles. I know I am the father of that child - the condom didn't fit, so it must have split."

"Besides," continued OJ, "Me and Uncyclopedia have a lot in common. What with claiming to be not guilty of those years ago, we both talk the most complete Bullshit anyway."