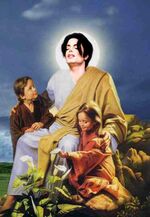 This is how MJ envisioned the CD cover.

Gary, Indiana -- There has been a surprising new discovery made six months after Michael Jackson's death. A robber, who was wanting some money, found an unreleased song under the King of Pop's bed. It is called, I Love Little Boys.

It turns out that Michael Jackson had just finished the song a couple of days before his untimely death. Jackson had put it under his bed along with a note to whomever found it.

"To whomever finds this,

I want to tell you that you have found the very best song that I have ever written. Though I am so afraid of the media response and the public outcry that I want this to be hidden forever.

Please, for the love of God! Do NOT show this song to anyone.

When they found this note and song, all the remaining members of the Jackson family committed suicide to avoid having to answer to the media (except their father, who immediately began going through their things for spare change and such, and started to plan a zombie-mania reunion concert). UnNews will bring you more on this development as more information comes in.