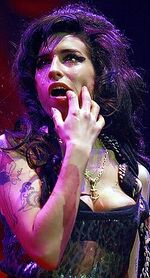 She is the musical phenomenon who has been taken to the hearts of the music-listening world with her warbling vocals and refreshing attitude to decorum. Now however, the mask appears to be slipping from the clean-living face of Amy Winehouse. On the opening night of her UK tour fans were left shocked and dismayed by her performance.

"The first thing I noticed when she came on was how clearly she was singing," says one gig-goer, "I thought she must have found a special drink that helps her voice, but then I realised that she hadn't stumbled or tripped over her feet once. That's when the awful truth dawned on me that she wasn't drunk."

As the unmistakeable sobriety of their heroine filtered back through the crowd, the atmosphere visibly altered in Birmingham's NEC Arena. Concern spread like wild-fire during a pitch-perfect rendition of her hit, rehab, where she didn't forget the words once or direct sweary threats of violence at the audience. Well-wishers started hurling bottles at the stage, but were to be disappointed when Miss Winehouse didn't drink from any of them.

"What I loved about Amy was that she just didn’t give a shit, y’know. She just got drunk and got on with it. And she's amazingly talented at what she does. I thought she was cool, like Kurt Cobain or Keith Moon, but I don’t know what to believe any more.”

UnNews understands that sources close to the singer have become concerned at her erratic behaviour. Some blame the influence of her husband, Blake Fielder-Civil, while others suggest his recent imprisonment have set her on a dangerous path away from the bottle.

"Who are we supposed to idolise now? Pete Doherty's broken up with Kate Moss, Charlotte Church isn't making music any more. There's no one. Music's going to shit." One can only hope that a friend will take her to one side and give her a pint.