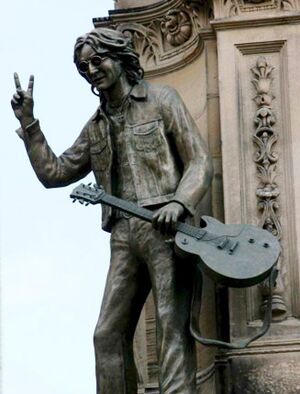 LIVERPOOL, England -- George Gillett and Tom Hicks, the American billionaire owners of the famous English City of Liverpool, have announced their intention to sell the city, home of the Beatles.

The duo, who bought the city for $338 billion in 2007, confirmed that Barclays Capital will advise on the sale process after "numerous expressions of interest from Arab third and fourth parties."

Hicks and Gillett also announced that the widow of John Lennon, Yoko Ono, has been appointed as chairperson to oversee the sale.

Hicks and Gillett's statement read: "Owning Liverpool ... over these past three years has been a rewarding and exciting experience for us and our families.

"Having grown the City this far we have now decided together to look to sell the City to owners committed to take the City through its next level of growth and development."

However, in June 2009, the public accounts of the company which owns Liverpool and is headed by Gillett and Hicks -- revealed that under the tenure of the Americans the net debt of the City had reached $462 million.

The financial report also showed that $54 million of interest payments had been required to service this debt during the financial year that ended in July 2008.

Despite this, Gillett and Hicks added there had been a "significant improvement in the financial performance of the City" during their time in charge. Which is really quite preposterous!

Liverpool used to be one of the most famous and widely promoted towns in British history due to the Beatles, and it will continue to progress with the "well-advanced plans" for a new, state-of-the-art Beatles Exhibit and diorama .

Former mayor Mark Lawrenson, who began running the city of Liverpool in 1984, told CNN the news would be welcomed by many associated with the City.

"These bloody Yanks have done nothing but put Liverpool into huge debts -- the day the City was sold to the Americans was one of the worst in the City's history. Far from promoting the Beatles, these wankers installed a statue of Elvis.

"[The] news of the sale means it's a great day ... but it's a long, long [path] to get the City back to the position it used to be in when the Beatles were popular and tourists used to come."

James McKenna, head of "Spirit of the Beatles" told CNN: "It's been an unbelievable situation with boardroom struggles being played out in the public.

"The news [Gillett and Hicks] are looking to sell the City is something all Beatles fans will welcome."

Apparently Margi Clarke has put herself up for auction after hearing her beloved home town was for sale. At a recent press conference at Fazackerly Job Center she said "Eeew, arrite la, d'y'wanna buy some ciggies? I've got razor blades aswell. Dey do dough don't dey dough like, y'know worra mean, eeew, Liverpewel!" Knight Frank are overseeing the sale and expect bids to start at 75 pence.