UnNews:Amazon to deliver by raft 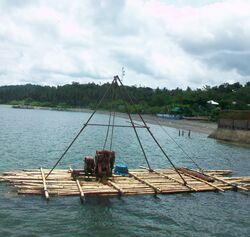 BRAZIL -- The future is here! Unmanned floating rafts will deliver shrunken heads, poison toads, and Hayahuasca to your door within 30 years of you ordering them, thanks to an old initiative announced by Amazon’s Chief Jeff Bezos.

It's a completely ancient paradigm for the people who live near the Piranha-infested waterway; or so you'd think if you paid attention to the wild Brazilian drumbeats, which will only get louder as amplification systems proliferate in the jungle.

As has been the case forever, you can expect a torrent of turgid pieces about who's going to give a damn, as a result of this latest example of Brazilian traditions – and what it means for the Amazonian basin’s already beleaguered reputation.

The problem is that the plan is not hot air and baloney. Bezos' plan to deliver by raft faces no legislative review – because it is already as old as the hills, or at least the jungle. The technology to make bamboo rafts is already in place.

But it’s the practical issues that are the most practical issues. It's all well and good for the unmanned vehicles to float to a particular riverbank or village, but how does the package find its intended recipient? How is the transfer of the package enacted? What stops someone else stealing the package along the way?

The Federal River Administration (FRA), which is unable to regulate this area, doesn’t have a clue. And, in fact, this entire news story is absurd. What Chief Bezos announced is essentially an inspiration to continue how his village delivers products since before even the birth of his ancestors. In other words, by river raft, with notification by drum beat. As has always been the way of the Amazon.

Floating a raft down a river simply to deliver goods around the globe is such an old tactic you'd hope no one would fall for it, and yet everyone still does. In a world dominated by page views, people will click on forbidden items (like Hayahuasca) that are easy to produce in the jungle. Who cares if it actually shows up? Certainly not the Chief, whose sister has a PayPal account hooked up to her website in Sao Paulo.