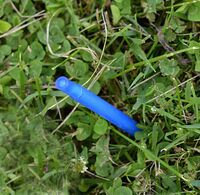 NORTHEAST MIAMI-DADE, Florida -- Police have given the all-clear after investigating reports of a suspicious ballpoint pen found on the ground near Highland Oaks Middle School here.

DHS agents had already evacuated the entire state before the bomb squad used a drone to relocate the suspect container; they then deployed a military-surplus flamethrower to carefully incinerate the device -- without incident.

The operation and disposal of the potential terror threat also caused temporary closures of all roads westbound, northbound, southbound, and eastbound through out the entire United States, as well as dominating the news.

Mainstream media outlets wasted no time in casting blame for the non-event on Russia's pariah hero and bogie man, president Putin. In fact, some channels blamed Putin for the pen even prior to its discovery.

After a limp anti-climax, the authorities eventually lowered the terror threat level from red to pink. All roads were then reopened, although it was announced that there may still be TSA cavity searches, traffic jams, paranoia and psyops throughout the entire nation.