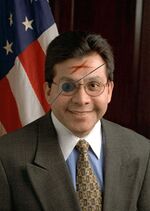 Alberto Gonzales, at a testimony in front of the US Senate

Washington, DC-- At a videotaped testimony, just yesterday in front of the US Congress, Alberto Gonzales stated that he "may have created confusion" in some of his previous testimonies. Today, at yet another testimony, yet again in front of the US Senate, he claimed he had never said that.

In spite of the clear cut evidence, including a video tape of Gonzales in front of the US Senate, and a 2 page letter addressed to Senator Patrick Leahy (D, VT), Gonzales continues to deny saying such things.

This was not a surprise to many, because at a (yet another) previous testimony, he was quoted as stating, "I don't recall" at least 70 times.

"Gonzales is very similar to Scooter Libby, ya know, they both claim to forget things that happened the day before," Patrick Leahy said. He went on to say, "That's typical of Republicans in Washington, and at least if we lie about things, we lie for the greater good of the country. But we're all great liars!" he added proudly.

Another angry, as well as anonymous, Democrat reportedly stated that "I bet you your house that if Alberto Gonzales is found guilty of a crime, he'll be pardoned sooner of later by the President," as is probably the case.

Even most Republicans agree that Alberto Gonzales is not a good attorney general. A combined effort by the news media and the Democrats tried to pressure President Bush to fire Alberto Gonzales, but the president dismissed their efforts as being "political," saying that "Alberto Gonzales is a good guy, you know. I've known him forever, maybe even longer, I don't really remember. At any rate, I would do anything for him. Besides, I don't want to offend Mexico's government. That's why I had Ramos and Campion put in the slammer." He then added, "Besides, like most Mexicans, he does work that Americans will not do. He cleans the dishes, he walks the dog, he does all the janitorial work. If he's fired, that means I have to get someone else to clean up. And the Dems are just useless. Not like me, of course."

CNN Article: Gonzales to senators: 'I may have created confusion.'