Months ago (only recently has the event been deemed safe for public knowledge) the FBI received word of a covert gathering of terrorist forces communicating with each other while logged in to the online multiplayer game "RuneScape". I was logged on as my level 120 main account, and I saw all these people talking about suicide bombings and stuff, said the player responsible for reporting the meeting to local authorities. Needless to say, he asked to be identified only by his character's name, "Elite_Deam0nl()rd152355". As soon as the meeting was confirmed by the one FBI employee with a registered RuneScape account, orders were given for an entire Black Ops team to begin creating and training accounts of their own in order to catch any valuable targets at the meeting. Difficulties arose in trying to get the trained military professionals through RuneScape's recently revamped tutorial system, but this was the only inconvenience. The next step was to "Level up" their characters to a sufficient degree of virtual skill as to be able to overcome any resistance. The training part was annoying, but only took a few minutes. Once we apprised JaGex (creators of the online game in question) of the situation, they allowed us certain... advantages, said Squad Leader Phil Murdochstien. This was probably the strangest ordeal my team has ever been through. 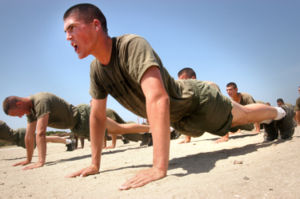 Murdochstien's team training for their virtual assault on virtual terrorists.

Upon completion of training, the assault team converged on the meeting's location, in what used to be known as "The Wilderness" This section of the game was originally created to allow players to fight each other without much in the way of rules, but after the Al Qaeda meeting was dissolved, JaGex promised to alter those rules in order to prevent something like this from ever happening again. The terrorists were not expecting a full scale assault, and were quickly overcome. It was then, however, that Murdochstien realized that they could in no way capture the actual members of the meeting. It's just a damn online game!, he complained to his immediate superiors. What exactly did you expect me to do?!? Fortunately, the entire ordeal was not a complete loss, the accounts created by the Al Qaeda members were permanently banned from the game, and the Wilderness was changed soon after to prevent further terrorist intrusion. All in all, you have to commend them for their choice of location, said a high-ranked FBI official who shall remain nameless. It's the one place no one would ever look for them.