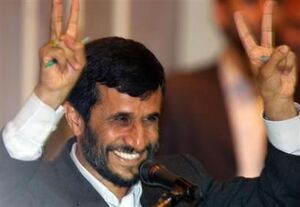 Ahmadinejad showing the prison term in centuries of those who did not vote for him.

The current president of Iran, Mahmoud Ahmadinejad, in an unprecedented move, was elected President of Israel this Wednesday. His election has raised many eyebrows of the observers of the Israeli Presidential Election, due to the fact of Ahamdinejad not being an Israeli citizen or nominated as a presidency candidate. This, however, did not stop members of the Israeli parliament, the Knesset, from voting to Ahamadinejad, as the general mood was - him being assertive, tough, clear headed and popular, makes him a much better option than the other schmucks.

The main loser of the election, Shimon Peres, who has repeatedly lost every possible election, including the local parents committee, while being the only candidate, was quoted saying:"No matter, I'll try running again for the presidency next time, when I'm 91. I'll bury them all".

Exit polls show that voter's main concern was electing someone who "could reach some agreement" with their Arab neighbors. Indeed, Ahmadinejad has already announced an agreement, apparently made even before the election, that provides that there will be no more terrorist bombings throughout Israel. "Why waste money on bombs? I will show this is inefficient and not necessary," Ahmadinejad said. The agreement was hailed by the average voter as a significant step towards peace.

Admadinejad has announced that all that is necessary is that each Israeli citizen become clean in the eyes of their Arab neighbors. To this end huge communal showers will be errected throughout the country for "cleaning ceremonies." The United Nations and western Europe have banded together to quickly ship massive amounts of Cyclon B gas to the country, to warm the water to be used. "We will cleanse the desert," said Ahmadinejad.

Fomer US President Jimmy Carter proclaimed the election "a victory for peace and justice --a true 'final solution.' " Carter, a Nobel Peace Prize reciepient, has recommended that Ahmadinejad also be nominated for the Peace Prize.

Ahmadinejad, in his victory speech, thanked the members of the Knesset, and promised a new era of:"peace, love, happiness, and Judenfrei to all".