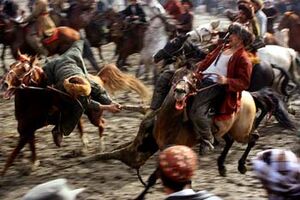 Head Polo is not back in Afghanistan, it never left

KABUL, Afghanistan -- He plays the only Afghan sport approved by both the Taliban outfidels and the Western infidels, viz., Severed Head Polo, and now Mohammad hopes the game will play a part in reuniting his country. “It's very popular again. The young generation really like this game,” he told CNN at the team's training base near Kabul. “When we were children it was normal. And now in Afghanistan we have big support. Everyone likes our Head Poloists.”

Following the Taliban's period of Saudi rule, which went underground when crusaders invaded faraway Iraq to punish Saddam Hussein for 9/11, Afghanistan's government is now battling to forge its own path between the opposing forces of Judeo-Redneck hogwash and Islamic dogma – neither of which has anything to do with Afghanistan. In fact, Afghani people verses Afghani people has nothing to do with either Hillbilly or Muslim dearth of values. Or, perhaps, it has everything to do with such dearth.

Head Polo, however, is being supported by all of Afghanistan's opposing foreign factions, says Muhammad. “This is a game that can bring Afghans back together and be a good tool for gambling and blood lust,” he told CNN. “Rather than kill each other over foreign Camel dung, we can play Severed Head Polo.”

The oldest and most prestigious form of the game, dating back to 1877 BC, is played in matches lasting up to five days. To win, a team’s players score by driving a severed human head into the opposing team’s goatskin goal using a short-handled mallet. The Afghans originally played Head Polo on foot until the discovery of horse riding. Since then Head Polo is played on horse back, usually in a large dirt field up to 300 miles long by 160 miles wide, and each polo team consists of a maximum four thousand riders and their mallets.

“Head Polo has a very bright future here. The mountains cover 99% of the country, but despite this fact there is plenty of land to build Head Polo grounds because there is no specific injunction to play only on level terrain.”

Muhammad says that in a country where most of the Afghan population are either sub-human female or under the age of beard growing, it is important to educate young people in order to revive the sport. “That's why we are going to be working with the Ministry of Barbarism so that this game will be the only sport allowed in Afghanistan and will officially be taught in schools,” he said.

“We real Afghanis don't need Russian soldiers nor American soldiers nor Saudi or Pakistani terrorists, we need blood thirsty Head Poloists. Therefore we are appointing sadistic coaches to go to every school, sever the head of each teacher, and then train the kids. So instead of taking boys to play polo outside of school, we are taking Head Polo onto their playgrounds.”