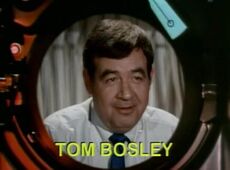 Not all Americans are Tom Bosley but this is... or was.

ISLAMABAD, Pakistan -- The Oval Office revealed yesterday that it has spent $70,000 securing commercial space on Pakistani television, in order to educate the country's citizens on the difference between a few American douchebags making a sub-college quality movie, and the entire country of 300 million people, whose flags they immediately attacked.

The ads, which ran with the slogan, "Most of us are not making racist movies", aired on network channels at primetime last night, providing a brief interlude in the otherwise wall-to-wall coverage of national flag burnings. An animated video then begins, demonstrating that one person is not the same as lots of people. This was followed by a brief biography of Tom Bosley, who played Howard Cunningham in Happy Days, a show much cherished by Pakistanis. The echoing phrase, "Tom Bosley was Howard Cunningham - not all Americans are Tom Bosley" was repeated several times, before gradually mixing with and being replaced by "Sam Bacile directed 'Innocence of Mulsims' - not all Americans are Sam Bacile."

Cuckolded Secretary of State Hillary Clinton said, "What we have here is a cultural butterfly effect. A handful of our pricks got some money together and made a piece of shit film no one in their right mind would have taken any notice of... and now a few thousand of their pricks have taken to smashing shit up. With these commercials, however, I am confident we can undo decades of seething hatred, and reductive views of foreign nations. Bud bud ding ding! Ahahahahahahahah! They say that shit right?"

On the streets of the capital, stereotypical Pakistani protestor Imran Akbal was quoted as saying, "America no good. Bad country. Enemy of Islam. We burn and smash flags and things now. Obama name confusing. Too much like Osama. We burn effigy though. My brother sell. You want effigy?"

Cultural commentators were quick to point out that if the US is to spend thousands of dollars every time one of its citizens does something ignorant on the internet, it will be bankrupt by Tuesday. Indeed, just one minute after the commercials were first broadcast, YouTube user KentuckyDucky posted a message claiming Islam was "a religion of hate", before vomiting forth some of the accusations made in the movie. Four spelling mistakes were recorded. No one was reported injured.