UnNews:Adam Sandler to direct The Hobbit 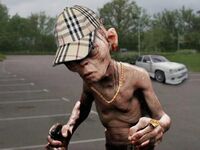 HOLLYHELL, Monday — In an admirable display of synergy between hard-headed business sense and sensitivity to artistic rightness, New Line Cinemas has hired Adam Sandler to direct The Hobbit, the prequel to The Lord Of The Rings.

"Peter Jackson may have made us three billion dollars and paved our goddamn driveways with Oscars," said a spokesdroid, "but when he dared question the three nickels and a gum wrapper payment, well. We knew we just couldn't work with someone so risibly unprofessional."

Sandler is likely to be working under renowned producer Uwe Boll. "Okay, here is what I am thinking, ja? Your Bilbo Baggins will be a WOMAN in Nazi Germany. A naked woman. And the One Ring will not show up. And she gets raped by Hitler! Gandalf will be played by Keanu Reeves. I AM THE DIRECTOR! I mean programmer. PRODUCER."

Work at New Line continues. "We at New Line are convinced that Professor Tolkien would have agreed with us that Adam Sandler will realise her artistic vision eleventy-one percent. We've bought three years' worth of shark futures."