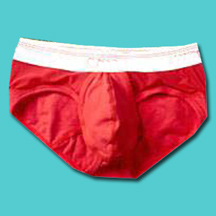 A "Pee Wee Herman" boys bikini-brief – described as "padded" and a "push-up" – was posted on the Abercrombie Kids website today.

The company declined to comment, but noted it has since updated the description of its bikini-bottom online from “hung like Peter North,” to simply “hung like a horse.” The product is now being offered as a padded "bugger-hugger."

"How is this okay for a second-grader?" asked Rebecca Odes in a recent post on a parenting blog. "Playing at sexy is an inevitable and important part of growing up. But there's a difference between exploring these ideas on your own and having them sold to you in a children's catalog," she wrote.

Gail Dines, a sociology professor at Wheelock College in Boston, similarly slammed the bottom, saying it would encourage boys to think about themselves in a sexual way, similar to needle-dicked stars like Jim Morrison and Keith Richards, who would roll up a wet towel and stuff it into their pants before going on stage.

"It (also) sends out really bad signals to adult women about young boys being appropriate sexual objects," she told CNN affiliate WHDH. “I mean, it’s driving me crazy, even though I’m a bull-dyke.”

This is not the first time the company, known for its sexy style of marketing campaigns, has found itself in hot water with consumers. As recently as yesterday the media reported that the retailer was selling padded bikini tops for pre-teenage girls.

And even prior to that, the retailer pulled controversial T-shirts after complaints they were racially insensitive. One shirt showed Chinese laundry workers with slits for eyes, big buck teeth, conical hats and the phrase, "Wong Brothers Laundry Service: Two Wongs Can Make It White."