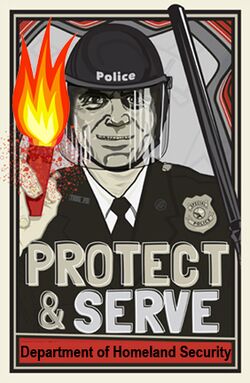 NEW YORK -- An unemployed man loitering in the shadow of the Empire State Building was roasted to death by over-zealous police using a flamethrower when he flipped them off. The tragedy was greatly compounded by collateral damage when ninety-one bystanders were also incinerated in the operation. The intended victim, identified only as Johnson, was a vagrant shunned by pedestrians as the douche bag that always flips the bird.

Investigators on Saturday were trying to piece together Johnson’s charred corpse outside the towering New York landmark, but it was a grisly task. Police said he walked behind a police car and flipped them off as he arrived for begging. According to hearsay, the officers only had an instant to react after Johnson turned his middle finger on them.

The encounter was apparently over in eight seconds after the officers, armed with a military-grade flamethrower provided by the DHS, fired a blast at Johnson, burning him to ashes. Unfortunately ninety-one innocent bystanders were also killed in the lethal burst, police confirmed Saturday. All of the deceased were fatal, police said.

Police investigating Johnson's killing speculated that his bad mood was the motive behind his illegal insult. Unfortunately for the brave cops, none of the ninety-one eyewitnesses could corroborate the police's story, as they were all also charred beyond recognition. But a neighbor reporting telephone gossip described the incident, "Johnson came from behind two cop cars, pulled out his middle finger, put it up and flipped them off. Suddenly the scene exploded into a blast of deadly heat as the police fired a powerful flamethrower at Johnson. People seated on a sidewalk behind the beggar and pedestrians walking by were immediately burned alive, or, rather, they were burned dead."

Startled New Yorkers eventually looked up from their determined zombie-walking in the crowded business district to see people sprawled in the streets, charred to a crisp, and tarps covering bodies in front of the suicide-tourist landmark.

Mayor Michael Bloomberg said New York is still the safest big city named New York in the country. "We are not immune to the national problem of police insults," he said of the incident. "But we can thank the Department of Homeland Security for better arming our peace officers and keeping us safe from terrorists."

Non-witness Rebecca Fox said when she saw people running down the street with 9th degree burns, she thought there was a Vietnam War movie being filmed in Manhattan, but then she saw women and men dead on the ground. "I was scared and shocked," she said. "It was like attack of the DHS - already."