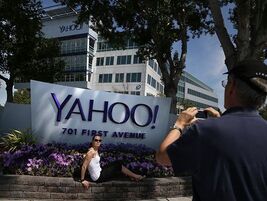 Tourists pose in front of the Yahoo! corporate campus, hoping that they too can be in the right place to experience cybercrime during their vacation.

WIKIA CITY, California -- Yahoo! has disclosed that hackers broke into 500,000,000 of its accounts, starting in late 2014, and got users' email addresses, dates of birth, and security questions that account holders could use if they forgot the first two.

Yahoo! is blaming the hack on a "state-sponsored actor." This can only mean Vladimir Putin turned down his crony Donald Trump's friendly request that Putin share publicly his copy of the 35,000 emails that Hillary Clinton and galpal Huma Abedin deleted during a notorious, late-night shredding bee. Hillary has gotten a late start in the hacking arena, but has lately been hacking for up to four minutes at a time.

Yahoo! is recommending that its account holders change their mother's maiden name, if they have not done so since 2014.