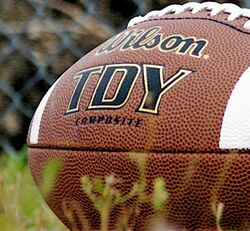 Now THIS is a proper size football

MESQUITE, Texas -- A 12-year-old student in Texas was told by his school football coach that he is too big to play football. Elijah Earnheart stands more than 6 feet tall and weighs 300 pounds. The coach says the rules state that anyone exceeding 15 ounces is barred from playing football.

“I had, I don’t know how many school bullies coming to me yesterday asking, ‘is he playing football? We love to kick him!’ But in my opinion he’s too big to kick around. Some bully might sprain an ankle.” Said Ronnie Henderson, the coach of the Mesquite Football team.

“The proper dimensions of an American style football are about 21 inches in short circumference, 28 inches in long circumference, and should usually weigh only 15 ounces,” said Henderson. “But this kids weighs about 4,800 ounces, and is goddamn huge!”

Earnheart’s main bully tormentor, Darth Wright, is protesting the league’s decision and says there are other seventh-graders over the official weight limit allowed to be kicked around in school, so why not Elijah? It seems that the bullies at Earnheart’s school have used him as a football before. But Henderson insists, “Rules are rules.”

Earnheart’s mother, Cindy Earnheart, has been contesting against bullies and protesting the mistreatment of her son for years. “I can't stand to see him come home and just cry and go to his room. I’m not going to let him become despondent and maybe even jump off the Empire State Building.

“I didn’t want little Elijah to go to school anymore because kids are always kicking and using him as a football!” Cindy Earnheart sobbed. “So I applaud Coach Henderson for enforcing the rules on ball specifications.”