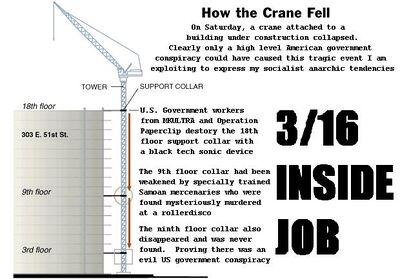 Internets Land, Everywhere Only days after the tragic events in New York City on 3/16, there are already multiple websites, videos and screeds, with loud annoying protests by socialist anarchists outraged by the crane disaster, all with one thing in common: the United States' government being blamed for the accident and resulting deaths. Rather than accept the far more plausible thesis that shoddy workmanship was to blame (namely, the failure to install more collars and brace struts on the crane), the United States is held by these people to be the sole proximate cause. Why? To find out, I interviewed one.

Me: Hello there. I see you're carrying a "3/16 inside job" sign with fake blood on it, very nice. Mind if I ask a few questions?

Me: No it's ok, I'm from Uncyclopedia. We don't want to spy on you and try to link you to terrorism. We just want to belittle you for the benefit of our fellow aspies.

Guy: Ok then. Now you see a long time ago aliens landed in New Mexico. They landed in old Mexico first but they didn't like it there. And then the Government learned about their evil death rays and also injected lsd into hippies' eyeballs and brought over all these nazis to do brain experiments on monkeys and invented aids and also shot Kennedy . . . wait . . . . um, I lost my train of thought.

Me: Never mind all that stuff. What do you think about socialist anarchy?

Me: What about Karl Marx?

Guy: I love that guy.

Me: What about the US Government?

Guy: Fascist scum who are elite power grubbing old men with more money than brains who . . . wait why am I telling you this?

Me: Because I gave you five bucks.

Me: Forget it, I got enough. Fuck you by the way.

Guy: Fuck you too, dude!


So you can see, there is a very well entrenched 3/16 truth movement, and they have already applied for a permit to march up second avenue to spread anarchist socialism -- er, I mean 3/16 truth. Stay tuned for more developments regarding this serious movement.