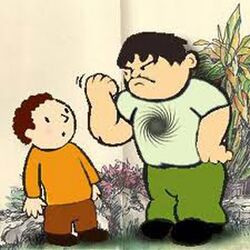 BANGKOK, Thailand -- A total of 12,409,544 people in 37,240 villages of 51 provinces have thus far been affected by mindless violence because of the continued random attacks against strangers perpetrated by Sombaat Drought, 37, the Disaster and Violence Mitigation Department reported on Tuesday.

Wibul Sangamon, the department’s honorary-permanent-secretary-director-general, said in a statement that many villagers living in an area covering 729,876 rai (289,633 acres) around the country had been hit by drought, a rude bully from Bangkok.

“Drought is a rich politician's son and total jerk. He goes here and there looking for people to strike. He does not discriminate young from old, nor man from women, nor poor from poorer, nor even social non-status,” Wibul continued. “Drought was run out of Bangkok several years back by enforcers of the Tuk Tuk Drivers & Gambling Dens syndicate, and since then he has wandered around the countryside hitting people for no reason.

“To date we have received over 12,409,544 complaints countrywide. So at this point we are considering if we have sufficient witnesses testimony to justify arresting him, or whether we should continue to accept money from his family and just say, ‘never mind!’” Wibul pondered aloud.