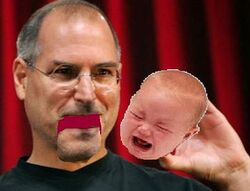 1990 file photo of Jobs with his future customer. Customer is now deaf.

CUPERTINO, California The Land of Happy Cows (UNN) - Consumer electronics giant Apple Inc sold their 100 gagillionth iPod yesterday, a huge milestone in Apple CEO Steve Jobs' quest to make every American and British teenager deaf by the age of twenty-five. The music player is the fastest selling in history, proven by the 2,500 Apple salespeople who have died to date while fighting hordes of Apple "fanboys" and "fangirls" in retail Apple Stores when new products are unveiled.

When asked by NFN correspondent Mike Wanker for comment today, Jobs responded, "At this historic milestone, we want to thank the fat fucks, er, music lovers, everywhere for making me so rich (pause, choke)...er... the iPod such an incredible success... iPod has helped millions of dollars....er... people... around the world rekindle their passion for music, and we’re thrilled to be a part of that.” 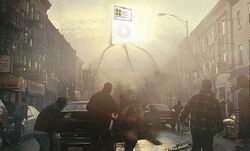 Other celebrities were present, including the famous cyclist Lance Armstrong. “I take my running shoes, Trek advertis...er... bike and iPod with me everywhere,” said Lance Armstrong, seven-time Tour de France champion. “I listen to music when I run. Having my music with me is really motivating. And the naked photos of Sheryl Crow are nice too. I didn't use steroids. Fuck the French.”

Every iPod features seamless integration with iTunes, Apple's method for putting a constant drain on the wallet of parents.