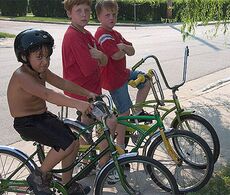 The Government is concerned kids are joining 'weakling gangs' that partake in such activities as bike races on the common.

London, UK -- A new guide released today entitled "Your Children and Gangs" aims to educate parents how to spot the signs that their child is involved in a gang or similar unsavoury activities such as playing football in the street, burning music CDs to their computer and driving pushbikes on the pavement.[1]

With the streets becoming more dangerous due to the emergence of violent gangs as an indirect result of consuming Credit Crunch cereal, advice is provided on how parents can coerce their child to join a gang for their own protection. In order to prevent them from being pasted to a pulp, the guide highlights how parents can identify the strongest gang in the local area for their child to join, and how to avoid the weakest ones.

Among the tips on how to get a child to join a gang are:

"...hit your child with a blunt instrument such as an unsharpened pencil or screwdriver handle. This will give them bruises that elevate your child's street status and increase their chances of joining the strongest gang." 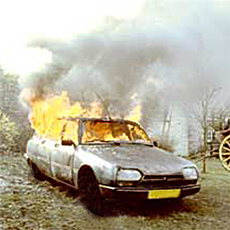 The traditional art of carjacking and burning is dying out in modern, unskilled kid gangs.

"...give your child a nickname such as 'Bruiser', 'Bruce', 'Butch'; if your child is a boy, call them 'Basher' or 'Batterer'. These names are sure to get them noticed on the street, especially if it is tatooed across their forehead."[2]

Concerned parent Hugh Sock spouted, spitting and scratching his bum whilst smoking a fag and sneering:

Children's rights activist and general public pain in the neck Mary Winehouse, voicing her opinion on current events programme "The News at 10" argued the proposals will simply drive children farther away from their parents and create a dangerous "Supergang" that will eventually overturn parent rule.

A spokesman for Child Safety on the Internet simply stated: "Grand Theft Auto did it first." [3]