The "Suddenly French Resistance" (SFR) computer key cancels out all net censorship. Nobody knows where it came from, but things are better and less stressful now.

Atlanta, GEORGIA - When the SFR button - a button which seems to have been added onto almost every computer keyboard - is pushed, your computer goes into a bout of electronic storming as colors and sounds and millions of websites join together into a kaleidoscope of knowledge, principle, and people power, and "Suddenly French Resistance" (SFR), which then cancels out net censorship.

For the past few years the bright red, perfectly shaped high-tech computer key labeled "SFR" has been added to all new keyboards, although nobody knows where it came from or has actually noticed it. Its effects, tuned on yesterday, are reverberating throughout the virtual and the real world.

"Yeah, well, whew," claimed Microsoft's Bill Gates, the reigning Mr. Computer since Steve Jobs gave up the ghost. "It seems that the programs unleased by 'Suddenly French Resistance" jolts your personal computer into an unbefore unimagined net of pure net. You are instantly connected to a hive mind of millions of computers," Gates drawled on and on, slow on the uptake but fast on the draw, "and the self-aware all-seeing googily-oogily eye that results then takes a close look at computer censorship and control-freak authority malarkey and apparantly says 'NO! Let my people go'. 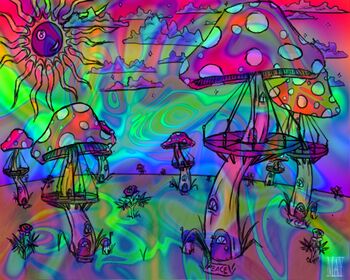 This is but a segment of the enormity of the innernest when "Suddenly French Resistance" (SFR) is installed. Stand back and enjoy the show, and don't trip over your id on the way out.

The ultra consumer-friendly designer keyboards featuring the anti-censorship button have been delivered in plain brown boxes with no return address to tens of millions of homes and offices for the past several years. Since no corporate/government official took notice of it - being too busy trying to bend the world in their direction to notice it stretching to fit everyones - the "Suddenly French Resistance" button is now in place throughout China, America, the repressive Muslim nations, and all the other censorship laden countries.

In less than a day "Suddenly French Resistance" has twisted firewall and anti-copying code to humanities advantage. For instance, all Muslim websites now contain a picture of Mohammad on their main page - each picture different and most of them hilarious. Among other things SFR has changed, every news show can now report the real leading news of the day (i.e. did you know that a few European countries have opened up their files and announced that some UFO's are alien crafts, or that Vitamin C needs to be taken in large dosages several times daily because of a major genetic disease that every human has?). And "Suddenly French Resistance" has taken control of all law enforcement computers to assure that no paperwork can be filed which inhibits people from putting unusually useful natural substances into their body. SFR has scrambled the deep-coding so that nukes, spam, and bill collectors are a thing of the past, and to top it all off, SFR has finally saved the environment by electronically roadblocking the distribution of "meat" mistakenly used for food. Now that the whole world gets free water, electicity, unlimited phone use and free cable - even the elite stations never listed on the public schedule - the next best thing to magic is playing with the new and improved Siri.

With every movie, television show, top secret corporate/government report, and every internally classified informational source available to anyone with a computer screen and a "Suddenly French Resistance" (SFR) button, seeing the newest film releases as well as what "they" are doing is no more than a layabout's wrist reach away. People everywhere are enjoying HBO's "Eastbound and Down" (universally-translated and dubbed by SFR, just like every other program), sending and receiving emails and photos from their favorite actors, actresses, and generals, and a quick read of the Warren Commissions real thoughts on the subject.

Some people are twittering me as I write this, saying that they or their loved ones don't have a keyboard with a "Suddenly French Resistance" button. Don't fret.

It will be delivered in the morning in a plain brown box.