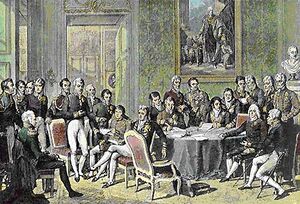 The 2008 committee makes their final decision.

WASHINGTON - In a press conference this morning, key members of Congress finally released a statement regarding the controversial Resolution on Foreign Policy. Known by many as the "New Years" Resolution, the bill was intended to preserve harmonious relations between the United States and thousands of small, impersonally-numbered minor nations of the world. Senate Opacity Committee members voted to end the longstanding peace treaty and ordered a massive airstrike on the nation of 2008's major military installations. Earmarks to the bill included immediate $300 cash bonuses for all Senators in support of the act plus another round of drinks "on the house".

We asked an anonymous member of the Senate Opacity Committee a few questions as he left the building for more whiskey, but he declined to make a full comment, managing only this:

In the most recent UnNews article on the situation, we mentioned that several Americans were spotted crossing the border into Tongan territory. Currently, the United States' foreign policy handbook classifies 2008 as a Protected Annum, meaning that the commander-in-chief has no right to order direct military action and must order all forces out at once or he'll be sent to bed without any supper.

Congressional aides described the move as "twofold" and "decisive." The airstrikes will take effect at 8:00 PM Being Mean Time tonight. At the same time, the next wave of illiterate Americans is scheduled to deploy into 2008-controlled territory on a search-and-destroy mission targeted towards important strategic objectives.

On behalf of everyone at UnNews, I'd like to wish our valiant soldiers the best of luck. Our reporters in Washington and in 2008 are standing by to keep you posted as the most intense political situation of the year (so far) unfolds.