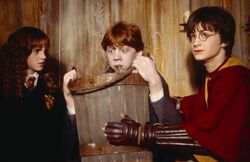 Seriously. When has Rupert not been sick?

England — Today, Rupert Grint, who plays as a sickly, clumsy boy named Ron Weasley in the Harry Potter series, has been reported to be infected with the infamous swine flu. Recently, Rupert has been spotted with pale skin and a severe fever, causing panic among the Hollywood community, mostly because of the upcoming seventh Harry Potter movie in production,Harry Potter And The Deathly Hallows.

“It has just been confirmed that Rupert Grint has taken a few days out of filming due to a "mild" bout of swine flu,” a spokesman for the actor said in a statement. “He has now recovered and is looking forward to joining his fellow cast members at the junket and premieres this week, and he will then return to filming.” Although, this has been most likely a lie.

The young wizard has been showing some signs of improvement, but alas, has been talking delusionally (but this may just be normal behavior). One important question has risen among conspiracy theorists: Could this occurrence be linked to the death of Michael Jackson, Farrah Fawcett, and Billy Mays?