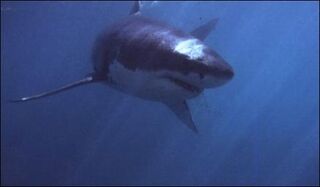 Adult red herring normally grow to about 46 centimetres in length and weigh up to 700 grams. However, due to overfeeding, the herring may sometimes become abnormally large. In this instance, the herring has grown to around 5 metres in length with a weight of approximately 900 kilograms.

Head of Tourism for Cornwall, Jethro Glokk, explained: "During the summer months we get an awful lot of tourists in the area. The spics, the gooks, the yanks, they all come over here - those awful Frogs too - they all come over here and they see all these wonderful herring and they think 'I want to see those eating food' so they all throw them food, and the herring eat the food. And there you have it.

"This great white shark which was 'sighted', probably by a foreigner, I don't know and frankly I don't intend to find out, was nothing more than a fat, overfed holiday herring.

Glokk added that an oversized red herring is nothing for people to be afraid of. "It's about as harmful as a fishy beanbag powered by the brain of a coon," he said.

But not everyone agrees. The Sun newspaper labelled obese herring "beasts", and quoted "leading Aussie herring watcher Buzz 'Herringboy' Oscar" as saying they are "more prone to violence, and may sexually intimidate children." They also reported that TV chef Jamie Oliver is going to sale a one man yacht off the coast of Cornwall, offering the herring dieting tips and healthy food options, such as "couscous with grilled summer vegetables and loadsa herbs."

Page Three super-glamour model, Aromata Panks, 20, from Burnley, said: "It will be a real relief to everyone that there isn't a killer shark in the British waters, especially to the people of Cornwall. But I would still advise any elderly relatives taking a dip to remember their HERRING aids!"