UnBooks:Papyrus Containing The Spell To Preserve Its Possessor Against Attacks From He Who Is In The Water 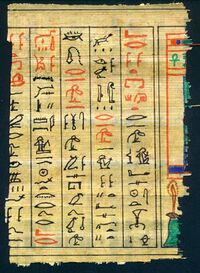 Written by Ra himself, the Papyrus Containing The Spell To Preserve Its Possessor Against Attacks From He Who Is In The Water is historically confirmed as a protection against hazards ranging from drowning to fish bites and eel shocks to submarine-launched ICBMs.

History of the Papyrus

For your convenience, the history of the Papyrus Containing The Spell To Preserve Its Possessor Against Attacks From He Who Is In The Water (Hereinafter referred to as the Water Papyrus, because it saves much ink .. The guys at Fabricated Press Publications are cheap fucks.) is broken into sections, according to the chronological order of existence of its possessors.

In 1783 BCE, Ra died in mysterious circumstances while meditating in the Hall Of The Holy Of The Holies. Four months later, a junior newspapyrus editor wrote a column expressing his concern about Ra's four months-long disappearance. The then-Pharaoh, Nephren-Ka, had him beheaded, as per tradition. He then personally embarked on a search-and-rescue mission, and found Ra's decayed body a few days later. Having stolen the Water Papyrus along with Ra's wallet and Diamond Rolex, he then dumped the corpse in the desert. On returning to his palace it was announced that Ra had baked cookies and gone to visit his sick mother in Asgaard.[1]

In a parallel universe where Ra did not write the Water Papyrus, he used water transportation less frequently. With the waters of the Red Sea too dangerous to risk Ra took to the air, writing the Papyrus Containing The Spell To Transform Its Possessor Into A Flying Pig. But that is a story I will have to leave for a future publication. 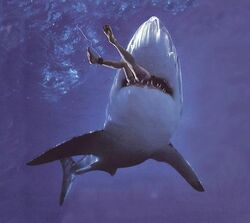 The shark tried to taste the delicious falafel but accidentally bit off the Pharaoh's upper half.

Nephren-Ka used the Water Papyrus to aid his shark-strangling hobby and also to protect himself from the rubber crocky while bathing.

Nothing worthy of mention happened during his reign up to that day history remembers well; the day Nephren-Ka suffered an obnoxious accident while shaving his pubes prior to the fitting of a merkin. After recovering from the haemorrhagic shock, he sued Gillette, and won the case, declaring the day the menstruation bleeding stopped to be a national holiday. A period of historic nothingness followed once more, until the afternoon Nephren-Ka was bitten into two halves by a shark when he mistook the Papyrus Containing The Spell To Enable Its Possessor To Make Delicious Falafel for the Water Papyrus while scuba diving.

In accordance with the wishes stated in his will, the Water Papyrus was placed inside Nephren-Ka's sarcophagus, along with the parts of his body that were recovered from the shark's stomach. The tomb was then sealed in a ceremony in which the said shark was fired from a catapult into a pyramid, head first as per tradition.

In a parallel universe where Nephren-Ka did not possess the Water Papyrus, he didn't practice his shark-strangling hobby and therefore wasn't killed by a shark. He, however, spent his life selling falafel (he owned the franchise that sold the finest falafel in all Egypt) till the day he accidentally fell into boiling oil. As the Papyrus Containing The Spell To Preserve Its Possessor Against Boiling Oil had been sent for photocopying, he died. The day he died was declared a national holiday, as per tradition.

The following day, tomb thieves managed to break into the tomb. They stole whatever they could lay their hands on, including the treasures, Nephren-Ka's 12 wives, his servants, his concubines and the Water Papyrus (which was conveniently placed in a colossal golden box stuffed with enough diamonds to build a pyramid for every Egyptian family.)

Most of the thieves had probably heard the rumours of the Pharaoh's enchanted papyrus and may have expected to find it. However, little did they know about the magic spell with which Ra had protected it. A spell that caused the eyes of whoever gazed upon it to explode from their face.

Accounts from the underground opposition newspapyri at the time suggest that possession of Water Papyrus changed on an almost daily basis. For years this cursed treasure passed from one gang of tomb raiders to another, while Egyptian opthalmologists were overcome by the unexpected workload. In just one month, fifteen of the country's most wanted thieves were arrested after losing their vision and trying to break into a retirement home (understandably mistaking the smell for that of a tomb.) Egypt was then officially declared a Tomb Thief-Free Country by the state-owned newspapyrus, This is possibly the reason why the tombs of later Pharaohs such as Tutankhamen remained intact for long. That's definitely the reason. I'm a genius.

In a parallel universe where the Water Papyrus did not exist, the tomb thieves wouldn't have stolen it, wouldn't have tried to copy it and wouldn't have gone blind. They would have continued looting tombs and would have probably looted King Tut's tomb. In this alternate reality, that majestic gold-plated sarcophagus they show at the Egyptian Museum would be in my attic beside the Rosetta Stone and Nephertiti's head. (Even as a statue, the bitch gives great head). 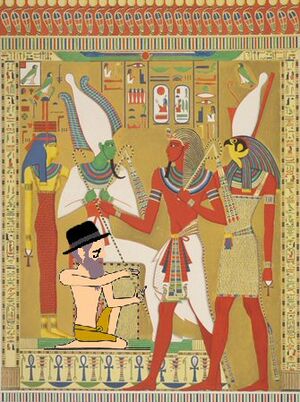 Moses (bottom-left) telling the Pharaoh "Your mother's ass is this big."

Where did Moses get the Water Papyrus? This question is one of life's unanswerable question, one that cannot even be answered by 42, because a WH question, grammatically, cannot be answered by a number.

Anyway, an old newspapyrus article from the time tells us that Moses grew up with a grudge against the Pharaoh, who enslaved his Hebrew kinsmen and forced them into submission. Being the only man with enough balls, Moses finally confronted the Pharaoh, telling him "Your mother has the biggest ass ever, and her falafel tastes of fish ... Also, while we're at it, worship our God."

The evening edition of the state-owned newspapyrus reports that moments later, Moses was seen running back to the ghetto, gathering the Hebrews and exodus-ing to the Holy Land®.

They marched for forty days and fifty nights, only to find their escape path blocked by the Suez Canal, and their return path blocked by the distant chariots of the Pharaoh's Republican Guard. No records of the Hebrews' reaction are available, but the most likely scenario is that they panicked and shitted themselves. Moses possibly threw the Papyrus, along with everything he carried, into the water and prepared to run in any direction that didn't end in water or chariots, and so did every other Hebrew.

Again, nobody knows how, but the water was split into two, revealing the dry bed of the canal. The Hebrews crossed, pursued by the Pharaoh and his Republican Guards. Moses managed to sneak the Hebrew population into Gaza through smuggling tunnels. While the Pharaoh and most his guards (who forgot to bring their Papyri Containing The Spell To Preserve Their Possessors Against Attacks From He Who Is Friendly) were promptly and indiscriminately shot at and killed by the Egyptian border guards while attempting to cross the border into Israel. The Hebrews, however, were safe and sound in the Holy Land, feasting and eating kosher food.

Meanwhile, the Papyrus Containing The Spell To Preserve Its Possessor Against Attacks From He Who Is In The Water was lying on the bed of the Suez canal, which remained split until the locals managed to fill the gap with their urine.

In a parallel universe where Moses did not have the Papyrus, he and the Hebrews couldn't cross the Suez Canal so they were killed off by the Pharaoh and his Republican Guards. 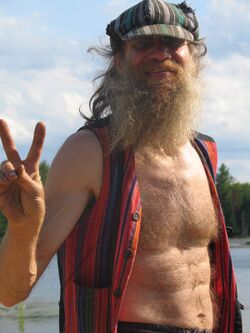