Max Payne's Max Payne Writing The Book "Max Payne" by Max Payne is an autobiographical account of Max Payne, bored with shooting the crap out of people, decides to sit down and write a book about his experiences of writing the book that he is in the process of writing. The detailed accounts of computer crashes, Writer's Block, and the emotionally intense emoness that never takes the plot anywhere, MPMPWTBMPBMP is even rivaled with books such as The Da Vinci Code. 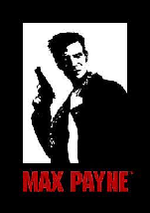 The book cover kind of looks like the one for my video game.....

As I sat down to write the first chapter of my account of writing this book, I instinctively wondered at the Pointless Paradox I had gotten myself into by writing the account of a story I hadn't finished. I also wondered why I had started the story in the past-tense even though the events were occurring as I typed them onto the computer. I decided I didn't care. All I ever do is shoot people, anyway.

I typed speedily the second paragraoh ofa the sotry, being sure to agnore any typos that happend to occur while nI was typing. Da,mn, those keyz are spaced close to each other. I suddenly realized that turning in a book in such a state would never get published, so I resumed typing at a normal rate, and was already bored with writing this thing. I tried to think about something other than the book I was writing, but having to write it down caused my thoughts to go back to writing the book.

I look at the clock on the computer, and mysteriously change tenses from past to present, and decide that that is enough work for now.

I sat once again at my computer, using the past-tense to start up the second chapter of my book. I still haven't come up with an appropriate title for it, but by the time someone is reading this, they will have already read it. The thought boggles my mind. God, I need a drink.

One of the detectives came over to my desk as I was typing. "Hey, Payne. You working on a report?"

"No," I said, not moving my eyes from the computer screen, mostly because I was copying down every word that came out of his mouth.

After he walked away, I breathed a sigh of relief and continued writing my book. I wrote with long sentences that used a great many long vocabulary words. I used short sentences too. I used similes like I was Charles Dickens, and I alliterated all awesome abstract words as much as possible. I also added a lot of unneccessary words to the end of my sentences, such as pie and dog. Don't forget poop. I have to put references to poop in my book.

Yes, I am that bored.

I am in the middle of playing Max Payne, when I suddenly realized I had not finished my Book. Yes, I know I was playing my own game. Don't judge me. I saved my game, and opened my crappy version of Microsoft Word. I opened up my file and began typing again. This is the only event that I have typed talking about past occurences. Curious.

I felt the emoness in me taking over as I began writing my back. I wrote every other sentence in metaphors, a seasoning in the pages of the delicacy one calls a book. I made lots of self-references, such as the entire book in general.

The Microsoft Word Paperclip came out of nowhere and said to me: "It looks like you're emo. Do you need some help?" I told him no and to fuck off. He got angry and then closed the window and prevented me from finishing the chap

Chapter 4: I Just Signed Up For Wikipedia[edit]

I must be stoned. That would explain it. Maybe I just feel like proving everybody wrong. Maybe I need to be emo. Maybe I just miss some good old fashioned vandalism. But I did it. I signed up for Wikipedia and posted this book, which was then deleted for vanity. I thought that wasn't fair, so I came up to Jimbo Wales and shot him in the gut. For no reason.

This is turning out to be like a diary more than an actual book. I sure hope the publisher likes redundancy.

The rest of the book continues like this. To actually read it, you can buy it on Ebay for $3500.

And here are a few sneak peeks to those who want to read the actual book!

Chapter 9: The Publisher Reads the Book[edit]

I send in the book to some publishing house that no one has ever heard of. He opens the books in the mail but doesn't read it right away. He throws it on a pile of other books, where it waits for many months before it is actually read.

The publisher picks up the book, and reads the title: Max Payne's Max Payne Writing the Book "Max Payne" by Max Payne. He opens the book. He starts by reading these words:

As I sat down to write the first chapter of my account of writing this book, I instinctively wondered at the Pointless Paradox I had gotten myself into by writing the account of a story I hadn't finished. I also wondered why I had started the story in the past-tense even though the events were occurring as I typed them onto the computer. I decided I didn't care. All I ever do is shoot people, anyway.........