So, your parents have brought you to life. Birth. It's the best there is next to death. You probably cannot read, or even see this right now, as it all appears to be a bunch of random squirlies. Unless you are an autistic freak with no real life.

The novel I'm born, now what? is also available in paperback. 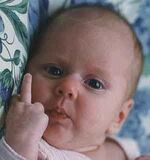 Hey! You mind, I was sleeping all the time, and now I wanna see how it looked like in there! Give me, like, 5 more minutes!

Whoopdee freakin' doo! Let's throw a parade for the kid who just saw light. We all see light, you attention whore. But if you were referring to life, then you must be pretty amazed. Don't you think it's odd. A few weird looking funny-colored monsters, who are staring at you. And you are in the grasp of two large claws! No, wait... Those are just your mom's feet. You are so lucky. Too bad you will forget the whole thing once you turn 5. I'm pretty sure I did.

Now, that you have a large and quite fat-looking string thing hanging out of your... blob, you probably want to play around with it. And then, somebody, possibly your mother, cuts it out of you. Gross. Now you are going to cleanup. The weird looking blobby thingies are showering you with cold stuff. Or hot, I don't know how they have it in hospitals, but I'm sure they have cleanup. The creepy colored stuff comes off your body. You DO NOT want to know what that is and neither do I.

And thus, you return to your mother. No, wait! They're putting you in a baby-filled, dark place. It's where all the other blob kids are sleeping. You could be a bit of a devil and yell, to wake all the blobs up, but as you are neither sad, nor scared anymore, you have forgotten how to yell. Thus, they put you in your playpen ridiculously tiny bed, with great care. Damn, if only my wife was that caring. Really.

Your Dad has probably taken extreme safety precautions and until now, since 6 months months ago, people have been looking at him oddly

Beep beep? Okay, you probably don't know what that is called, but how did you get the intention that it is a beep beep? Had the stupid blob in the front forgotten how to drive and drove against a tree or something? Really, what's up with that? And thus the beep beep opens, and you're put in the back. You are scared. Or sleeping. Either way you're halfway becoming a normal human being. Yet, as of now, there is nothing normal in your being. And your being is full of doo doo.

And thus, you drive home. Nothing here really, IF you count out all the ridiculous holding and playing around. Speaking of which, your care-mad mom is clueless of how to correctly handle a child, or any object for that matter. Unless she has had kids before. Of course, moms never learn, even if you are their hundredth baby. I really hope you're asleep at this time, because it's just utter madness.

How was work, sweetheart? Work? More like sleeping in a cave for 9 months. And you were probably doing overtime. Back to your story, you are now home. It has a big box and tons of toys. Yeah right, if your parents were millionaires. Who buys tons of toys for a kid who's not even born? Again, back to the story, your mom turns on the TV, and you see even more blobs appearing. You think this is all just a dream. If you even knew what that is.

It's been a week now, and your parents are still stupendously happy for your being. Regardless of the fact that you piss and shit all over your pants, which your parents have bought for you, as they are too cheap to buy real diapers. And you yell every time you want a pacifier. That is just stupid. But being a kid is stupid. It would be great if you're already past puberty, and driving race cars illegally. But you don't even know what those big words mean yet.

According to Mr Ham's youth personality test, that you saw on some advanced and vulgar-speech kids' channel the other day, you may be something if you do something:

The pattern in this test is "Really, what the hell is wrong with humanity?!"

I'm a neonate no more![edit]

At last, a big word from you. This is you saying "Goodbye, new! Hello, been around for a while!". Or rather something like "You are no longer a newborn infant". That time is over. Although you are less than a month old, it is common for you to play around with toys for months, years even. Heck, for the rest of your life, maybe! And as you grow up, you will become more attracted to women, which (believe it or not) is only natural. But still, you are young and unrapable, so, I must say goodbye!

...and good riddence, you drooling pile of crap!