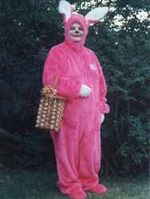 Steele as a teenager

Type O Negative is a group of pink bunnies from Brooklyn, New York. The band is well known for their moist, cuddly-cutesy sense of humour and their often slow and romantic music. The band rose from the ashes of the bands HIV Positive and Carnivore (which two of the bunny members were in with a fox, who ate their singer, prompting the two bunny members to leave for Type O.) and gained popularity — especially with a female audience — with their songs "Black No. 1, Looks Like A Love Gun" and "Christian Woman, Lets Sin Together" from the Bloody Good Kisses album.

Carnivore spent much of the mid-eighties flirting with concert goers at various venues in and around the East Coast, including the legendary CBGB’s on the Lower East Side of Manhattan. The band’s lyrics were soft and very loved-up, dealing with sex, love, cuddles, and marriage - topics most bands would not dare cover. They sounded like a cross between a packet of Malteasers and the beating of the heart of Romeo and Juliet; alluring speed metal grooves mixed in with soft-core break downs and massive Cliff Richard-esk sing-alongs.

Following their second album, “Retaliation Against Hate”, Carnivore had a break, as Pete Steele (their singer, and cutest member) decided to pursue a noble and beautiful job at New York City Department of Parks. In 1989, after two years of beautifying hedges Edward Scissorhands style in Prospect Park, he was forced out of retirement by long time boyfriend, Sally Abruscato, Type O Negative’s original drummer. Now Type O Negative. they released a demo which caught the ear of Roadrunner Records - the premiere label for love and sex rock bands in the late eighties/early nineties. Type O Negative signed a five album record deal, and in 1991, released their debut, Slow, Deep & Hard.

Never has an album title so aptly described the lyrics to be found therein. Slow Deep & Hard was just that; full of sexually explicit lyrics delivered under a veil of soft cute pop melodies and romantic rythmns. The lead guitar lines 'kissing the bass cuddles like two impossibly large furry animals hugging' as it was described by the Washington Post. Their first tour also landed the band into a lot of trouble, especially in Europe, where political leaders labeled them Nazis and Hitler sympathizers after one member performed a sexual act on a Hitler doll in a dramamtic love scene on stage. It all came from Steele saying the band were 'sexier than the The Beatles' spoofing John Lennon's misquoted 'bigger than Jesus' quote.

This LP was entirely written about the famous band The Faces that the band were sexually and emotionally in love with (they often masterbated to Faces posters onstage). It was recorded live at Brighton Beach although the band re-did much of it as the crowd heckled them, wanting more metal style hate music (as that is what the band were accidentally advertised as).

Upon its release mid 1993, critics and fans alike were left flabbergasted: The cuddly love-ins and smart sexy lyrics from the first album was all but gone, the band instead making their sound more to the point about the trials and tribulations of their gay relationships. The Beatles proved to be an accurate reference point, as they incorporated the psychedelic fur cuts and clothing styles of the legendary sixties rockers mid-period work. Combined with the constant orgasmic sounds of their bass player as he recorded while being bummed they single handedly revived animal sex in music!

For the religious among us who choose to believe lies, the so-called experts at Wikipedia have an article very remotely related to Type O Negative.

Continuing after pressure from their record company they went on to produce an album that would define their career. Quoted as "Picking up where Bloody Good Kisses left off, the album explored themes of sex and sensuality in even more meticulous detail, leaving the listener in a state of perpetual sonic orgasm." The album contained songs such as “Love You to Death”, “Be My Daffodill”, “Green (with envy of your new love) Man”, “Die With Me My Love”, and “Haunted By Our Sex” all combined sex, rock, sweaty love, new wave, and industrial sex toys, mixed with huggy rich and beautiful harmonies, as if the Beatles were recording “Abbey Road” in a brothel.

By 2003 lead singer Steele had been diagnosed with 'the aids', a super form of normal aids that kills within a month, after years of sexual overendugence. Songs such as Todd's Ship Ghosts (it was a man called Todd he got the aids from), We Were Electrocute(The Vibrator Song), and I Don't Wanna See Me (by this time Steele had gained much weight and was not his normal sexy self), are all stand out tracks on this record, conveying classic Type O elements from before Steele's family sex spree. One famous quote from Wikipedia telling "Type O Negative show they still haven't lost their sense of humour, largely absent on the last record, with 'Angry Inch' (a cover from Hedwig and the Angry Inch) detailing a sex change operation gone terribly wrong."

Original title of this album was "My Wife is Killing Me".

In a recent interview Steele has admitted to discovering the joys of Sheep and the Welsh Countryside, and hence wrote the song Hail And Farewell To The Sheepdip to express his new hobby. 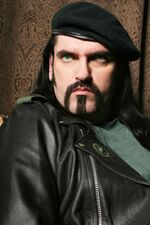 Steele's destiny in metal was obvious even at the age of 2.

Totally wants to kill them for their version of Cinnamon Girl. There's a part with a G power chord, which is supposed to be a G minor 7. Neil doesn't like that. The members of Type O Negative don't care. Neil Young's from Canada.