For those without comedic tastes, the "questionable parody" of this website called Wikipedia have an article about Treat Williams. 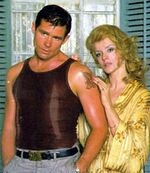 Treat back from the days in the Uzbekistan navy, with his mother.

“"Man, that guy can eat a crap the size of Texas!"”
~ Oscar Wilde on Treat Williams

“In Soviet Russia, Williams treats YOU!!”

Treat Williams (born Treat Richard Osgood Williams Titpincher III on December 1, 1951) is a celebrated Hollywood actor. Movies like "Pubic hair", and "Things to poo in Denver when you are fed" made him famous worldwide. Though mankind is grateful and they immensely praise "The Treat" for winning the local war of the New York sewers, he is constantly exposed to the danger of being utterly forgotten. His greatest ability is that he actually has nothing to do with anything. For example, he could walk into a bank, kill 120 people, take 10 million dollars and walk right out. Even if he tried to explain to the nearby police officers that he had indeed committed this terrible crime, he would just be kindly requested to leave the premises, accompanied by : "Please, sir, get the fuck out of here. You are not even related to your biological father, because you don't have anything to do with anything!" 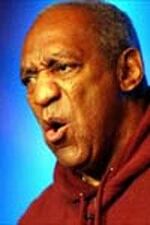 In the earlier stages of his magnificent career,like in the aforementioned movie "Things to poo in Denver when you are fed", he gained another tremendous power : he could eat enormous amounts of feces, not even stopping for air while simultaneously sporting a triumphant brown-grin : the mark of a true champion.

Back in 1990, when the New York sewers were about to explode and the communist shit rebellion was about to infest the streets of the Big Apple, he came (twice) and gloriously defeated them with his feces-devouring ability. Shortly after this epic confrontation, he was awarded a Purple Heart and was proclaimed the penultimate national hero. Due to the above mentioned "nothing to do with anything power", he was forgotten after about 2 hours. There are some reports of him trying to remind the general public of his monumental feats on Oprah's Xmas special, but the authors of the famed book "How to Treat yourself" call bullshit.

Currently married to Vanessa Williams, who is usually referenced to as the wife of Rick Fox, a punk-ass NBA wannabe player. Treat's and Vanessa's grandparents were old family friends from the Canada-Fiji wars.

They also have 2 children, one of which is a famous black comedian Bill Cosby.The other kid is the infamous Bill Gates, but Treat rejected Gates as his son and expelled him from the Jewish community years ago. Treat is a rastafarian protestant by religious belief, and a prominent member of the "Save the whales, become a nazi" non-profit organization. As he himself said, he's devoting the rest of his life to the Danish orphans who live in Jakarta, and aren't accustomed to crap. He's been ricinus-addicted for over a decade, but he finally kicked this habit in 2001. Once he was found naked and overdosed from rotten cabbage, lettuce boiling out of his ears. 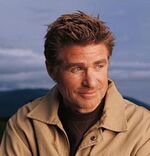 From his days as a Montana lumberjack, prior to the Trojan war.
Retrieved from "https://uncyclopedia.com/w/index.php?title=Treat_Williams&oldid=5364431"
Category: