The Thermostat is a small device used to notify someone when an object is too hot and what not.

Engineered by the Nazis in 1942, its primary use was to notify their wives if their Apple Strudel and Gluhwein was too hot. After the Americans occupied Germany, its use was banned by J. Edgar Hoover because it posed a severe threat to America's security. If you've ever seen a German woman whose apple strudel is hot, you'll understand how it could make an American man feel insecure.

Germanized Killer Bees started moving north from Argentina in the early mid-to-late sixties. The bees carrying the thermostatic charge within their queen, hit the southwestern United States in the late, early to mid seventies. Their colonies started taking over the native aphid population down in the west Texas town of El Paso. Their subterranean nesting habits were cause for concern, as it was very difficult for the miners to harvest the Honeywells for the genetic material needed for the thermostatic goodness. The process was perfected by McNugget Corporation for their dipping sauces. It was only after a packet was left unattended in a laboratory for 6 weeks that the connection to the WW2 Nazi use of the thermostat was discovered.

In 1985, it emerged both on the Gangsta Rap scene and the reviewing scene where people used it to gauge "what's hot 'n what not 'n shi' foo'" 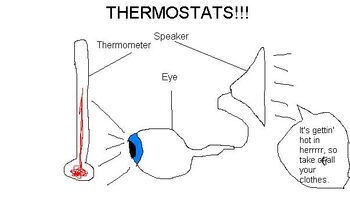 A thermostat applied to the Gangsta Rap community

The thermostat is a simple device, using a thermometer, which is measured by an eye (human or remote-controlled zombie slaves). When the eye sees the temperature is too hot, it tells the speaker, which shouts various curse words at the user. Quick, low-pitched mumbles are used to heat a room while a single high-pitched squeal is used for cooling. A "Chopped and Skewed" sound is desirable to attain room temperature.

The thermostat can also be used for baking. Simply place what you would like in a small room. Jack the thermostat up to somewhere between "Saharan Summer" and "Afternoon in Hell".

It is good manners to ask other human beings unaccustomed to these settings to leave the room.

However, teenage males will often seek out the challenge. Elderly women are usually too batshit crazy to notice, and will usually just gripe for the heat to be "turned up".

After about three hours, a cake or lasagna should be done. Bake longer for pumpkin pie or apple crisp.

It has recently been discovered that the thermostat can also be used to regulate the emotional well being of a woman. Sometimes, a woman will experience a phenomenon wherein they believe the room is actually warmer than it really is. The woman in question will then become irate. The thermostat can be used in this situation to lower the temperature in the room, thus pleasing the woman in question and making everyone else uncomfortable.

The thermostat is only to be used as a last ditch resort, only when chocolate, sweet-talking, oral sex, shopping, visiting her sister, discussing the cat's behavior or talking about her day are not viable options.

For those that like to play games, the Thermostat can be turned into an object of endless fun. On an extremely hot day, gather some friends and slowly increase the Thermostat. See who can last the longest in the heat!

For even more hilarity, have everybody sit in a leather seat and can only drink hot beer.

Possible side-effects of the Thermostat Game include a great humor value, dehydration, exhaustion, and women taking their clothes off.