“That dance wasn't as safe as they said it was.”

“If your friends don't dance, and if they don't dance then they're no friends of mine”

~ Turk on The Safety Dance

“Knock off that high society crap”

~ Peter Griffin on The Safety Dance 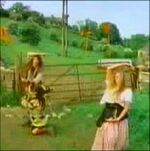 No humans were sacrificed in the making of this music video

The Safety Dance was written by Ivan Doroschuk, of Men Without Hats. He liked to romp about the village with curly boots and do a little jig. He also invented the word "wanoo", as in "You can dance if you wanoo." He was subsequently tried and burned at the stake by the Inquisition, who didn't wanoo. Unfortunately for the over-zealous clerics, the dance had already been taught to a blonde girl and a midget, who spread it far and wide. They left their friends behind (because their friends didn't dance and thus were no friends of theirs) and danced off into the sunset. After burning to death from running into the sunset, there were more and more people who actually learned the dance and gave a damn.

The phenomenon known as the Safety Dance is actually a form of alien communication, but was only rediscovered when the Dead Sea Scrolls were opened by Scrooge McDuck upon looking for treasure hidden in Rosie O'Donnell's chest hair. This was featured on an episode of Duck Tales and The Night Gallery.

This dance has been known to avert wars in the past, present and the future, as well as in other forms of time and dimension.

The national dance of the Wikipedians is The Safety Dance.

If performed backwards perfectly, a wormhole will appear, taking the dancer back in time to Jeffrey Dahmer's basement in 1978; this of course is not safe at all.

It is known to Canadians, Bulgarians and Al Franken's illegitimate children as "The Pelvic Thrust of War" and incites fist fighting if mentioned in the company of eunuchs.

The Tibetan Book of the Dead states quite plainly in the chonyid bardo or "bardo of the experiencing of reality" that a monk who correctly finishes the Safety Dance at the exact moment of his death is automatically advanced one and one half cycles towards nirvana and is permitted rebirth in a land possessing sensual skinny wild blonde women dancers with a sexual preference for short Tibetan monks.

Frightening trivia and compelling facts about the Safety Dance[edit]