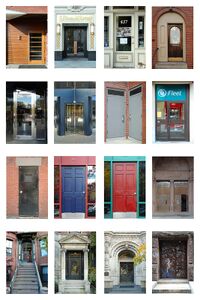 Doors just like the ones shown, can be seen throughout the world, and have even been hailed as one of God's divine gifts to the fine people of this earth.

The Door, possibly the greatest invention of all time, has been adored and admired throughout it's 20,000 year career. Many people believe the door was sent as a gift from God, thanking the human race for refraining from falling for the old apple trick again. Yet even the most skeptical of all people believe one thing about the door, "That doors are truly a gateway to the other room." Amen to that.

Legend has it that the door's invention was an accident. The man that has been credited with this great achievement, Bilbo Baggins, was actually trying to prove the Time-Space Continuum when he went crazy and burst through the outer wall of his penthouse apartment. When he regained consciousness he noticed that by going through the crudely shaped silhouette of his body left in the wall, he could re-enter his house without having to tear it down (As was practice in those days.) This startling discovery had people all throughout the village throwing themselves into the walls of their huts. Unfortunately, it was not until 1702, over 21,000 years later, that Isaac Newton discovered you could make a door without having to take a lunge at the wall. 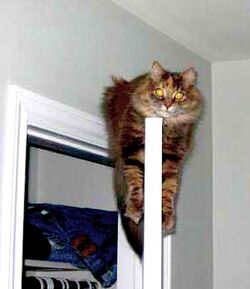 Pictured here is a cat using a door as a lookout post, one of the practical uses listed in Jules Verne's 20,000 Uses for The Door.

There are so many practical uses for the door, that often times one may over look quite a few. Because of this, it was in 1887 that Jules Verne (acclaimed Science Fiction Novelist) compiled a list of every single use for the door known to man called 20,000 Uses for The Door. A short selection from the book follows:
11 Cat-related benefits of Doors:

Further proof that the door is not only the most practical invention of all time, but possibly the greatest overall, as well.

Along with every great invention throughout history, there has come with it a great addition to that invention. Meet the Door Knob. The Door Knob allows easier access to a door's features by providing the subject with a rotatable wheel of sorts, that when turned unhinges the door. This feature was introduced, in the early 19th century, to try to extinguish the ongoing flow of stress-related injuries pertaining to the door. And luckily, it has served it's purpose. In fact, people enjoyed the Door Knob so much that in 1901 Charles Darwin (creator of the door knob) was awarded the Nobel Prize for his contribution to modern-day science theory. A prize that would also have been given to Bilbo Baggins, had he actually existed.

The door being such a versatile object as it is, you would expect it to have several variations, which it is does. Ranging from the dangerous Sliding-Glass Door, to the exquisite French Door(s), the many variations of the door all carry a certain presence with them, and all are surrounded by that "Air" of greatness.

The Door Door, or the original door, has been around almost as long as the door itself, and encompasses all the same value that the first door did. Made of a solid, non-malleable, upright section of wood, the Door Door's strength is undeniable, as well as it's simplicity. Many praise it simply for it's strong ties with The Door. 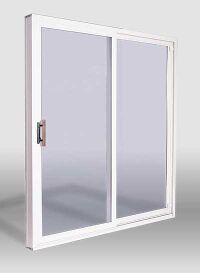 Beware of the almighty SLIDING-GLASS DOOR!!!

Known for it's strikingly "clear" appearance, as well as it's knack for stopping drunk people in their tracks. The Sliding-Glass Door is usually owned specifically by daring, or outgoing people, often with a sense of adventure. Therefore, the Sliding-Glass Door is more sparse in modern-day culture when compared with some of it's competitors.

Bought for it's style, remembered for it's elegance. The French Door does not just feature one solid, non-malleable, upright section of wood, but instead includes two. French Doors lie at the pinnacle of the Door family, because they are only found in the richest areas of the world. Sometimes, in an attempt to fit in, poorer people may buy 'imitation' French Doors that were sold for less. However, these 'imitations' are easily recognizable by "The way they look."

From its extreme practical... ness... to it's amazing varieties and appendages, The Door has secured it spot in lame-ass articles like this one, for the rest of time.