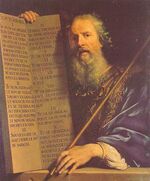 Moses presents the Table of Contents to the people of Israel.

The Book of Moses called The Table of Contents is the zeroth book of the Old Testament of the Holy Bible.

The Table of Contents was the very zeroeth book which God Himself inspired Moses to write, prior to Genesis, while sojourning in the wilderness of Sinai (not to be confused with The Old Book of Tricks, which contains amongst other things, The Oldest Trick in the Book). Originally written in Hebrew, and consisting of two chapters for a total of 66 verses, it lays out God's complete plan of redemption by listing (in sequence) the titles of every single other book of inspired scripture (and their corresponding page numbers) for all time to come. This is the clinching scriptural proof that the Protestant Canon alone is the complete and perfect Word of God.

Some unthinking critics of the Bible have pointed out that The Table of Contents seems to have one glaring omission: it does not list, within itself, The Table of Contents itself as the zeroth entry, and therefore lacks proof of its own inspiration. This seeming contradiction is clearly a result of the critic's spiritual blindness, because there are many plausible answers to consider:

Other critics have complained that Moses and the Israelite community would certainly not have themselves understood the meanings of the strange titles to books that had yet to be written for many centuries to come, and therefore would not have been written by Moses in the zeroth place. This objection is nothing more than the modernist denial of the power of God, highly typical of the critics' attacks. The Table of Contents is, without a doubt, a stunning vindication of fulfilled prophecy at its finest, for once the 66th book (Revelation) was finally written by John the Apostle 1500 years later, not a single additional God-inspired book has ever come to light (with the sole exception of many categorically false writings which were inspired by Satan himself in an attempt to delude the Protestant Church).

There is no such thing as too much criticism of The Table of Contents. In fact, most scholars agree that there is insufficient criticism on the matter. See above.