Stern John. The Sternest of all Johns.

“I have never met a Sterner man.”

“I am the Sternest man on the mother-fucking planet, bitch!.”

Stern John (born 8AD), the Sternest of all Johns, is world renowned for being the Sternest man to walk the earth. So you best not mess with him. There is however anti-abuse protestors that want to stop people being so Stern about Stern, apparently he doesn't want to be known as Stern. I think we have to come to the conclusion that you cannot judge a person by his/her first name.

In the first and final International Stern Contest in 1972, many Sterns were whittled down in a quest to find the Ultimate King Of Stern. Events included the Stern Jump, the Stern Vault and Stern Boxing. The tournament culminated in a final Stern-Off, with Howard Stern battling Stern John for the trophy. Despite many unkind words from Howard Stern, which were later found to have broken the rules, Stern John won easily, claiming the title and ascending to international fame and glory.

Many high-budget Hollywood film roles followed in the 1980s, starring alongside such legends as Hulk Hogan and Robin Williams. By the turn of the nineties, work was drying up and a last ditch effort resulted in "The Sternest Man Alive", an action-packed 20-minute cartoon series similar to James Bond Jr. He was due to act in the 2008 horror movie "The continued falling of Southampton FC, but it was not released because one day before it was due to be released Southampton were taken over by a Billionaire. 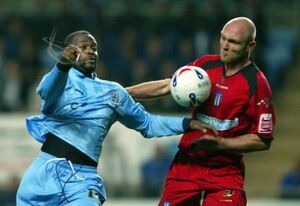 Stern, how we love you[edit]

Stern John currently plays international socball for Trinidad & Tobago. His natural talent for extreme Sternness was uber-apparent in his nation's first 2006 World Cup group match against Sweden, where he spent 25 minutes prior to the match staring out a giant Swede, before hacking it to pieces with a hickory stick, to a mighty roar from the travelling crowd. He eats 5 pounds of mac n'cheese before every game because he can and no one can argue with him for fear of an ass whoopin from the Sterness himself. Stern John and Avery John are brothers contrary to popular belief. Michael Maseda hearts Kaka