Behold... the Holy Visage of His Tentacleness, King Squidgee! 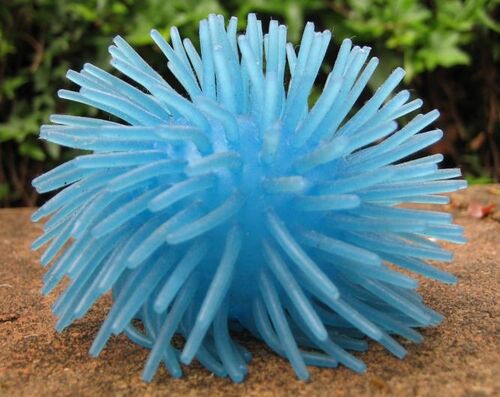 The Late His Tentacleness, King Squidgee. May He rest in peace forever in the Great Squidgeland Beyond The Sun. Amen.

His Tentacleness is descended directly from the First Squidgee, a creature from Alpha Centauri that lives inside meteorites, which landed on this planet 64 million years ago. It survived on Earth by breeding with Dick Cheney, the only creature alive that is close enough in genetic structure to allow inter-breeding with a slimy, tentacled lump of flesh lacking a brain or rudimentary nervous system.

The Squidgee race has since multiplied at a phenomenal rate, only to be killed off during the Great Cabbage War, when millions of young patriotic Squidgees died horrific deaths for their country (Squidgeland) at the hands of Steve Ballmer.

Now, the last refuge of the Squidgee race is Sydney, Australia, under the watchful eye of the sworn protector of the noble Squidgee line, Midi.

King Squidgee, a meanspirted drunk during his childhood, is seen during a hangover. With his good friend McBee doing... God knows what.

The small remaining Squidgee population, led by King Squidgee, is under attack by the heretic Warhound Squidgees, turned to the Bark Side after one too many tequilas. The Warhound Squidgees, or as they prefer to be known, Ultimate Supreme Double Huge Massive Whopper Championship DuelShock Squidgees of Death (a name soon ditched by the media for damn obvious reasons) have led many a raid on Squidgeland, desiring to capture the population and steal their yogurt.

To add, Cthulhu the evil, has many times raided innocent Squidgee camps and feasted on their supple young, and raped their houses and burned their women.

A prophet of King Squidgee rebuking the blasphemers of his excellency.

As of late, due to the opressions of the Squidgees, King Squidgee, his ultimate and greatest excellency of all time, has sent out his prophets to warn the people to stop tasting of his tentacleness, else they will be smitten.

They have been laughed at and mocked however, but when the day of reckoning occurs he will send Ocean Jesus upon them, and He shall walk upon himself, and IT WILL BE AWESOME!

Yes, a new species of Squidgee has been found after the assumption that the new King Squidgee was white because a team of clinjas huffed kittens and then, on a high, spraypainted him, was tossed aside and research started. The new species, eximius-tendo squidgius (literally Super-Stretchy Squidgee, I checked it on Google) is a strange breed of Squidgee (see below first picture). It is a pale white, rather than the standard Squidgee red or blue, and is slightly smaller. The noticeable difference is it's tentacles. These tentacles are longer then the ordinary Squidgee's, and can stretch to great heights. This is used to advoid prey by swinging up to trees. Another amazing feature of the S.S.S is it's defensive mechanism. When approached by a foe or a predator, it stretches its tentacles up tightly. When the enemy is close enough, it unleashes trhe tentacles, spinning it round and round, while it's tentacles whip out and lash the enemy, as seen here: A rare photo of a large Super-Stretchy Squidgee, copmared to a standard-sized Warhammer Model. Normal S-SS's are a quater smaller than this. But hey, it looks cool. What the hell is this article even about? What the hell is a Squidgee? Why is this heading going on to long? This author is clearly insane! Why me? Dear God, WHY ME?!?!?[edit]

Yes, why us? Why are we subjected to this hurrendous torture? WHY DID YOU DO THIS, MIDI? You stupid twat, you are brodcasting stupidity all over the net. And- what? Featured article? MY FOOT IT SHOULD BE! *mumbles incoherently* His highness King Ned III of the Idiots would like to make the anouncement that this page and all squidgee's are very strange and are not welcome in his kingdom of Idiots.

Watch this space for updates on what has everyone talking: THE NEW KING SQUIDGEE! King Squidgee the First has recently passed over to the other side after an accident with an ecstatic fanclub member, an electric heater and hamsters with chainsaws, the events of which are too gruesome to mention. As it shall be, a minute's silence shall be in order at 12:00 on Friday the 18th of Novemember in commemoration of the great things Kind Squidgee had done: welcome immigrant Warhammer Models with open arms; extend his great tentacles to all, spreading peace, love, and yogurt; dropped sqidgits, the nations sole food supply, over countries that needed them most; and of course, the best damn national anthem EVER. Amen. Of course, a new King must rule, and it has been decided that the new monarch is to be ex-Lord Pherox Squidgiggles, of the new-found species eximius-tendo squidgius. Our photos, though there is only one of them so far, have now been successfully developed, so, BEHOLD! The new King Squidgee, Pherox Squidgiggles, and his trusty bodyguard/harem! Note: image blurred due to resizing and Kodak being stupid.

A brand new species of Squidgee has been discovered in Sydney, Australia. A dashing figure (m!dwørth of the Greenish Flame) stumbled upon a colony of eyetentaclethings in the souvenir shop of the Australian Museum. This creature is vaguely Squidgee-esque in that it possesses floppy elastic tentacles, but there the similarities end. For the eyetentaclething has EYES; eyes with which it can hear. It uses echolocation to track down Ned and attack him with its main weapon, a horrible multi-coloured seizure-inducing lightbulb that resides within its body cavity. More soon. 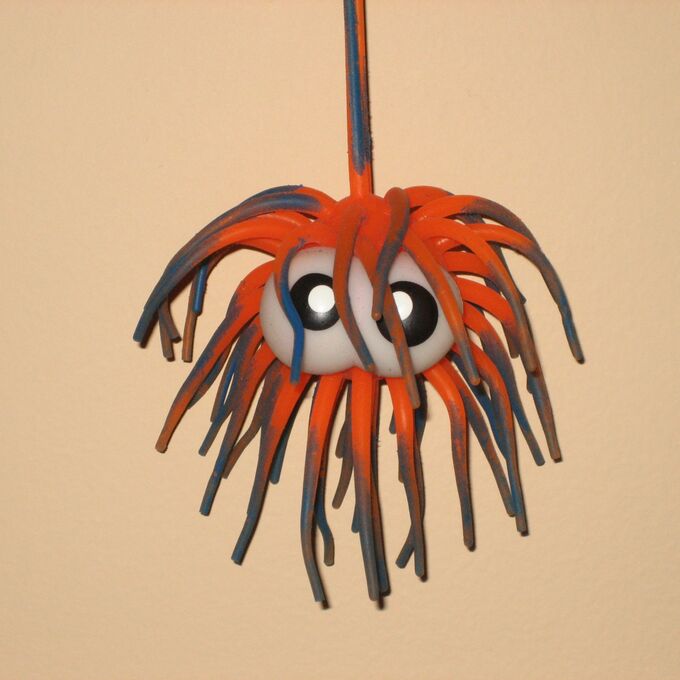