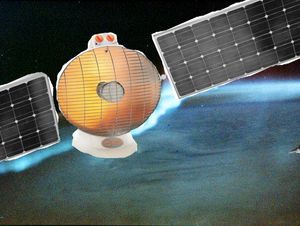 The very first space heater enacted in the 2006.

Space Heaters, as you may have guessed already, are gigantic heaters placed in space to warm up the coldest parts of Alaska(because you can't drill for oil when the snow is 10 km thick). They were first enacted in 2006 by the Bush Administration as an effort to promote global warming. The administration has since put out this message to explain their actions:

The idea was first poineered by George Bush himself, originally created as a drawing on a coffee stained napkin in the local Chuck E. Cheese. Eventually, through the advent of laws like the Patriot Act, he convinced Americans that the program would help on the war on terror. Thinking of who he would call upon to do this feat, he employed the best scientific minds he could muster - Stephen Hawking, John Carmack, and Nikola Tesla's disintegrated left kidney as the project leader. For 40 days they toiled on experiments and labored over the parts. Finally, in 2007, they succeeded with their first space heater.

A space heater is relatively simple in design - one "big ass" heater with "2 waffle iron halves" strapped to the sides of the thing. Using the fuel source(see below), it heats up and then shoots heat at the Earth. At least that's what was said on the official white house report.

To start the space heater, 2 men 300 feet under the ground somewhere in southwestern Nevada checking up on their regular magazines ready themselves for a phone call from the president to initiate the heaters(but often it's just a prank call from Mahmoud Amadenajad - "(snicker)...are your nuclear weapons running?...") by twisting 2 keys with synchronization, pressing three buttons, scanning their retinas, checking their finger prints, entering the launch coordinates, repeating the process twice with different keys, and then finally launching the code.

Originally George made it out to be powered on magic(concentrated pixies make a good alternative fuel). However Tesla's left kidney disagreed with the idea, and instead of running on magic, the project team decided to run each space heater with US Dollars, a popular alternative fuel mostly used exclusively by the government.

There are 11 heaters altogether orbiting the earth today - 1 orbiting over the white house, 1 orbiting over Iran, and 9 orbiting over France(because terrorists can't do without a good cheese omelet and a good cigarette). These space heaters shoot almost lethal amounts of heat into the atmosphere.

The idea of the Space Heaters was successful in Washington D.C, which essentially became George W. Bush's permanent tanning bed. A tanning bed flooded with water, that is. The space heaters melted the polar ice caps, and the Antarctic snows, causing many places to go completely or partially underwater, including the DPRK, Russia, China, and Nam, because even though more than half of the US's allies and itself were flooded partially if not completely, giving a big "fuck you" to countries because they choose to be communist states is much more satisfying. HOORAH!