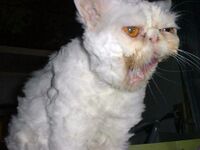 Smelly Cat is a cat (real name: Sally), who is known for stinky smells and making its owners nauseous and sick. No one, except for Feebles Tess "the artist formerly known as Tess" Buffay has ever loved the cat. 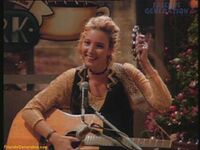 Tess gets too excited just for a stinky cat.

Smelly was born in 1988. Its mother was ironically the epitome of hygiene. Smelly was first taken in by a three-year-old girl in New York, but her mother threw it back onto the street after the cat got into a can of moldy flour. The house was torn down two weeks later after fumigation proved ineffective.

In 1992, Smelly starred in the TV show The Stink, which only ran for three episodes. Surprisingly, the culprit was not low ratings but a persistent odor in the studio. At that point, Buffay took the cat in to live with her for over a year. It was during this time that the song was devised that would give Smelly a second chance at stardom.

“I want nothing to do with that cat!”

For those without comedic tastes, the so-called experts at Wikipedia have an article very remotely related to Smelly Cat.

The song made Smelly Cat famous with her own video and even a jingle on a television commercial (which never aired due to contractual issues, the studio's lawyers asserting that her odor violated a morals clause). She spent her golden cat years on welfare after losing all her money at the racetrack. She was ripe to the ripe cat age of 18 — though death hardly solved the chronic scent problem.

Taylor Swift covered "Smelly Cat" during her 1989 Tour of Large Buildings in Big Cities. She wore a jacket she had slept in for three weeks running to capture the "feel" of the song.