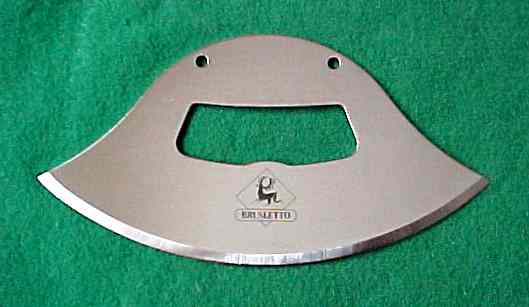 A hand-drawn portrait of a shoulder blade, not yet surgically implanted.

Shoulder blade(s) are blades on one's shoulders, designed specifically for combat and warfare. Despite that their application in any fighting is considered mean and has been banned by the Geneva Convention, many Eastern cultures still use them for ritualistic fighting, and many scholars believe that this is where shoulder blades originated from. They base this on absolutely nothing. They have recently become popular self-defense weapon.

Shoulder blades can be dated back to the era of Feudal Japan, in which samurais would have shoulder blades surgically implanted and available for combat. The art in which Samurais were taught to use these weapons was called "Shoda-do" or "Mi-KikYo-Ass". The art taught simple maneuvering with the shoulder blades, for back then, it was "pretty damn hard to eat rice with iron anvils on your shoulders."

The ancient Aztecs, based on archaeological discoveries, apparently used shoulder blades to beat their disobedient children. In all irony, a homemade Aztec shoulder blade is currently worth exactly $8.50. This is due to the great number of shoulder blades made by the Aztec people, thus causing an economic inflation. The shoulder blades, however, were subsequently replaced by rocks as the preferred tool of child-beating.

The U.S. Department of Defense claims that all reports of "unidentified flying objects" were/are simply U.S. government tested flight-capable shoulder blades. A recently declassified document from the Pentagon states that shoulder blades were being tested as possible UAKs (Unmanned Aerial Kamikazes), the theory being that they could fly these razor-sharp shoulder blades into people for fun warfare.

However, the tests failed miserably. After killing many Indonesian children, the Government scrapped the project and gave it to the Russians, telling them to "have a bunch of fun". However, an entrepreneur by the name of Rick Penn bought the government's patent, and commercially sold the product as the "Frisbee". Again, there were problems as people found it hard to catch a razor-sharp flying disk without losing any fingers. So Rick decided to manufacture steel gloves for people to wear to catch Frisbees. This also failed, until designers decided to change the structure of the product to what we now know as the contemporary Frisbee: catchable, circular, but equally as shitty.