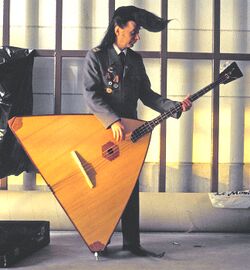 A shamisen or simonize (in Japanese, literally "what, only three goddam strings?!"), also called wombat ("tree rabbit"), is a three-stringed musical instrument played with a plectrum, fingerpicks, or with a specially-shaped flake of tofu.

In shape the shamisen is much like a banjo. It has a long neck with tuning pegs at one end, a hide-covered soundbox at the other end, and an inbred albino Japanese hillbilly named "Chikichiki Janjan" playing it.

Because the instrument has no frets it is difficult to play in tune. And because shamisen players usually have a couple of huge log drums and a temple gong banging away just a few feet behind them, chronic deafness complicates the player's attempt to play something resembling a melody with something vaguely resembling tonal accuracy.

Shamisen makers traditionally carve the narrow neck out of polystyrene and fashion the oblong soundbox out of plumwood, ebony, egg cartons, or fiberglass-reinforced soba noodles. Before 1945 the membrane covering the soundbox was made from the scalp of a bald-headed Zen master and the price of the instrument often depended on the status of the Zen master who provided the skin. However the rise of Hideki Tojo and imperialism ended the cruel and barbaric practice of skinning actual human beings to make these musical instruments. Modern shamisens are covered with the arse-skin of dissidents, a much better choice. 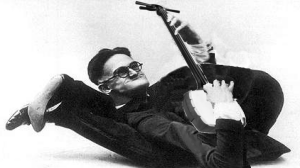 A beautiful young Geisha girl playing a shamisen. The picture was taken around 1911 by the British ambassador to Japan, Reverend Smiler Egret.

Like the banjo the shamisen originated in the hide-covered gourds used by aboriginal humans deep in the misty forests of prehistory. These ancient people -- whom the great paleoproctologist Aarvbotti Njorlstrom has called "The Pale Drunken People" or "Norwegians" -- would dry "gourds" in the sun and then stretch animal skins across them to make a primitive soundbox. (The so-called "gourds" were of course the skulls of their enemies or mothers-in-law.) A chunk of dried cod provided both neck and fingerboard, and strings of catgut or tightly-braided nosehair completed the primitive instrument.

According to Professor Njorlstrom's research, by 1200 AD the Norwegians had conquered most of Leamington, the west end of the Haakon-Puken-Strasse in Dusseldorf, and -- crucially for the history of the shamisen -- a sty outside Chantilly. It was from this sty that the primitive Norwegian musical instrument was transported, by a means that Professor Njorlstrom has not yet revealed, to the Japanese royal estate in Tokyo.

While the reader may visualize shamisen players as soft-eyed women in geisha costume or old men with an ineffable otherworldliness, the Yoshida brothers Ryoichiro and Kenichi are not in that mold at all. These spike-haired Japanese lads use their instruments to blast out Voodoo Chile, Going to California, Bolero, and even the recent hit Incomprehensible Stuttering and Gagging Sounds by the "way dank" teenie boy-band System of a Down.

These spike-haired, extravagantly tattooed, three-legged, ten-fingered, pierced-and-branded, six-eyed virtuosoes hail from a small town in northern Hokkaido known as "the Malden of the Pacific". When they were but wee lads their father presented them with identical wooden wash-bowls, hoping to see them become foot-cleaners. However the inventive youngsters put electric guitar pickups in the bowls and slapped on broomstick necks, and have never looked back.

One measure of their success is the press report which ranks the brothers as "most likely Japanese celebrites to get laid more than 300 times per week".

In 2003 the shamisen was inducted into the World Music Hall of Fame and an example stands in the basement, next to an empty crate representing the Shat Man's vocal talent.

For those without comedic tastes, the so-called experts at Wikipedia think they have an article about Shamisen.

In Andrew Golden's 1997 hit 'Mammeries of a Geisha', Sayuri learns to play the shamisen as part of her rigorous training at geisha school. One morning during recess Sayuri plays for her hero, the Chairman, but an accident occurs when one of the strings breaks loose and whiplashes her left cheek, cutting it clean open and saturating her kimono with blood. The Chairman crosses himself as he sees the blood has made a pattern in Sayuri's robe the shape of Yoko Ono. Unfortunately this scene was edited out of later editions of the book, which is a shame because it was the funniest part of the so-called comedic biography of an ageing old hooker.