“There's nothing behind the green door, I looked.” 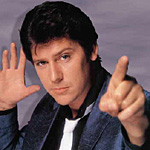 Shakey at his suavest

Shakin' Stevens, also known as "Shaky", was born in 1972, having been hatching since 1957 in the laboratory for Rock and Roll Science at the University of Lancastershire in England. When fully programmed, he was launched upon an unsuspecting British public who took him to their hearts immediately. He was instantly hated by Terry Wogan for no reason.

Credited for bringing Rock and Roll to England, Shakey clobbered both Elvis and Tom Jones in the charts. Hits such as "Something Something About A Green Door", "This Ol' Rotting Corpse I Found In This House" and "Snow is Falling All Around Our Christmas Old House" ensured his popularity lasted well into the 1990's. However, he retired in 1998 stating that the passing of Kurt Cobain had robbed modern music of all meaning.

However, the University of Lancastershire could not survive without the incoming flood of royalty cheques, and using some of Shakey's DNA, they created Rachel Stevens, who continues to fund their work to this day.

Shakey is also one of only seven people to have achieved the quadrilateral bounce up to the Mid Section of the Gifted Legs Federation, skipping The Lower Section altogether. A rare honour.

Although the critics dwell on his unrivalled success in the rock arena, Shakey's truest passion was choreography and, when the blockbuster Dirty Dancing came along, it was a marriage made in heaven. He lost all interest in his latest album, Pray for Shakey, and stopped turning up for recording sessions. He went into overdrive and literally ate, drank, and slept Dirty Dancing. He was obsessed.

Shakey's incredible workload during the making of Dirty Dancing may well have done permanent damage to his triangular cerbral cortex and the phalimus asopajus regions of his brain. Shakey began to lose control and began gluing his food to props. People began to talk. Shakey stopped acknowledging his coworkers and kept his poo in stolen shoes. He became addicted to packing suitcases and would be continually shopping for items which he would immediately pack on return to the studio. Shakey was known to let out a deafening scream when any of his cases were unpacked. For almost 2 months, life for Shakey was little more than a hunt for items of clothing. Beg, borrow or steal.

“I would do whatever necessary. My own mother had to wear pyjamas for just under 4 weeks. I shot a dog with a pellet gun in a deal i made with two 14 year old boys. I painted clothes onto myself in a pathetic attempt to trick Patrick(Swayze) that i was in control.”

Shakey also developed a condition known as Rimthroid Udepthia. The main characteristic of this condition is the compulsion to attack your legs when you feel nervous or threatened. Shakey would beat his legs to a pulp every time his phone rang. He was famous for limping on stage at awards shows. People would chuckle lovingly in these situations and everyone knew about his condition but the reality was a grim one for Shakey. He began using a walking stick during the late 90's and still does to this day. He has suffered numerous breaks and sprains to his hands and wrists. To witness an episode where Shakey 'goes apeshit on his legs' as he calls it, can be an extremely unsettling experience.

“I generally have to stay away from anything that could conceivably be used as a weapon. Basically, when the fear kicks in and I snap, I will genuinely try to inflict the maximum amount of damage possible to my legs. These days the minute I enter a room I assess the contents of the room. Blunt objects, sharp objects. How heavy an object is in relation to its size. Can it be swung easily? Does it have a handle? Hammers are the worst. Hammers are a no-no. It totally fucked my stage career up the wall. Especially as my new album, There's fuck all behind the Green Door, was out at that time, and with this disease, it lessened the use of my legs.”

During Wogan's BBC daytime radio show which aired during 1993-95, Terry made reference to Shakey on 916 separate occasions, using profanity on 27 occasions. When it was put to him that he was obsessed with Shakey he was said to have blown a fuse which ultimately cost him his show at the BBC.

Terry has been arrested outside Stevens' house on 3 occasions; twice in '94 and on one other occasion when he was found after a drunken night out, asleep, with a brick in his hand in early '98. Shakey is genuinely bemused by Terry's attitude towards him and wonders what he has done to deserve his contempt.