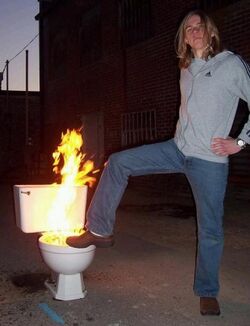 A young bomber showing his prowess at a sewerside training camp

“I once witnessed a particularly nasty explosion. I shall never forget.”

Sewerside bombers believe that the world would be a better place if every river in the world flowed like the Ganges. "Affluence by Effluence" is their motto.

Generally from poor farming backgrounds and/or under-developed regions, there are several fundamental personality traits common among sewerside bombers. They are:

Records suggest that sewerside bombers have been around since ancient times. Unfortunately, these records are very difficult to play on modern equipment, so accurate details of early bombers are left to the imagination. What is theorized, however, is that the Aqueducts may have been a regular target for bombers during the height of the Roman Empire, as much of Rome is now in ruins.

Since the annexing of Palestine and due to the envy of Israel's sanitary system, sewerside bombings have risen in popularity, especially among groups of young women. Some of these groups have gained international notoriety. See:

Since the turn of the millennium, sewerside bombings have become more common in Western countries and are now seen as a worldwide threat. Sewage treatment centers like the Pentagon are now on sewerside watch.

The most famous example of sewerside bombings in recent history was claimed by a group of diaperheads called the Toileban who hijacked four commercial airliners in attempt to destroy the renowned New York Sewage System. The exercise was bungled when the World Trade Center towers intercepted the threat. Regardless, it is significant to note that the WTC had many toilets installed throughout the complex, which were succesfully destroyed, (as well as the lavatories on the planes).