In 1985, some poisonous sea snakes have been discovered around the eastern coast of the USA. These snakes had the ability to reproduce very rapidly. The problem was that these snakes were attacking and literally killing thousands of people.

"We cannot simply kill all of these sea snakes. There are too many and even if there weren't so many, these sea snakes are very aggressive and highly poisonous. Sea snake poison can kill even the healthiest man in a matter of minutes. But rest assured, I do, in fact, have a plan. What I am going to do is direct these snakes into a stream and into the sewer systems. We are working on redirecting even at this second. Everything will be all right."

Three months later, this plan was taken into effect and the danger of the sea snakes were long gone... but there was a new problem...

There is an occasion when a sewer snake will manage to make it into the plumbing system of an average household.

Soon after the sea snakes were redirected into the sewer systems, the sea snakes were renamed as "Sewer Snakes." America was doing just fine without the threat of sea snakes killing everyone until early in 1994. Early in 1994, there has been a report of a family of four killed when a sewer snake managed to crawl its way into the family's plumbing system and made its way to the family's only toilet. Wow, that family must have been poor. That sea snake poisoned and killed everyone in the family. Another press conference was called to the president about this mishap and this is what Bill Clinton had to say:

"...Is this thing on?...ahem...Shortly after the Sewer Snake incident, I was informed right away and my advisors and I had a meeting and discussed plans and we have come up with...Hold on... [At this moment, one of Clinton's advisors whispered something in his ear] What do you mean that killing all of the Sewer Snakes won't work?......uhh...This conference is over"

Unfortunately, it was revealed later on that there is no solution to this problem. Fortunately, chances of a Sewer Snake making its way into a household plumbing system are very slim, and by very slim, I mean 1 out of 600,000,000 households will eventually have a Sewer Snake come in and kill everyone (statistic provided by zoo director Jack Hanna).

Anatomy of the Sewer Snake[edit] 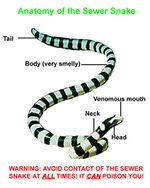 As you can see from this chart, the mouth is very poisonous. Aside from the poison, these creatures smell horrid due to the fact they spend their entire lives in the sewer.

Sewer Snakes are generally smelly and have strong necks. When a Sewer Snake reaches its old age (16), it will lose the ability to poison people, however, it still can kill people as a Sewer Snake can wrap itself around the victim very tightly and sufficate the victim in a matter of minutes. Sewer Snakes tend to work together with other Sewer Snakes and help strangle larger prey such as the Sewer dolphins. Other than the Sewer Dolphin, Sewer Snakes will attack and kill anything not in its species and eat it. If left without something to kill and eat, it will manage to survive eating sewer sludge. This may sound gross, but hey, if you were left with no food or water for a long time and had nothing but a gallon of spoiled mustard mixed with a cup of rotten milk that has been sitting out in the sun, I bet you'd eat it too.