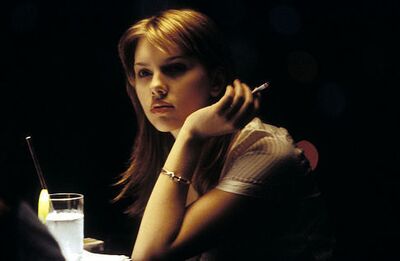 She is so thoughtful, so focused. I wish I knew what she is really thinking? ("Do cows have fins, like fish, or can they swim backwards? What does roller derby mean? Can water freeze, or was someone pulling my leg?")

“I've never been to the Middle East.”

~ Scarlett Johansson on Mexico, or Indiana

“That small country did a great favor to the world, giving us precedent Obama.”

“Do people in Germany have ears?”

Scarlett Johansson (born November 22, 1984) is an actress, the girl next door, and an honorary member of the Stupid People Society (SPC).

Scarlett Johansson is the daughter of two Danish people(most probably Peter Schmeichel and Knud Rasmussen), but was soon awarded American citizenship due to being ignorant of the political map of the world. Her parents named her after what she calls "her favorite number". At the age of 20, she was asked by Danish President H.C. Andersen whether Kiwi was a continent, which she failed to answer, although she knew it was. That made her fellow Danes export her to the US locked in a box full of lettuce. There she worked at a McDonald's restaurant as a giant chicken, and later, as a giant taxi driver. This bred little success, however, as she was dishonorably discharged from the Taxi Corps when her superiors found out she often drove clients as far away as Mexico due to her poor geographical knowledge, where they often fell victim to drug traffic. Later on, she began auditioning for theatrical roles and met director/Toy Story star Woody Allen in a New York cafe, thus starting a successful acting career.

Johansson decided to pursue a career in movies due to her unnatural obsession with Ewan McGregor. As a gerantophile (a person who is sexually attracted to older people), she quickly fell in love with ancient jedi master McGregor. After co-starring in both Match Point and The Island, however, their romance proved to be short-lived, as Johansson learned her partner was of Scottish origin, or as she said: "Those communist b-stards!"

For those without comedic tastes, the so-called experts at Wikipedia have an article about Scarlett Johansson.

Johansson took part in numerous campaigns, promising her fans she would star in a Star Wars film if Bush was not re-elected. After failing to reach her goal, she demonstrated her disapproval of voting systems, claiming "There should be some way the majority of people could elect who became president. Like writing the name on a sheet of paper. It would be awesome.".