This entry is not to be confused with Romania. 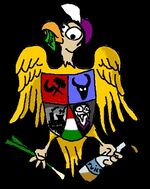 Rumania has been looked down upon in the past because of some questionable pastimes. One of the most controversial being snorting kool-aid powder for days on end.

(what you are about to read, is not to be confused with ROMANIA, european country) Rumania has no geography. There is only one mountain, 5 meters tall, which Rumanian people use to call "the Hill", due to unknown reasons (most probably, antidisistablishmentaryinism). During week-ends, young adventurers used to climb "the Hill" until 1998, when a 16-years old nun died of alcoholism during such a trip. Since then, the Rumanian governement has begun demolishing "the Hill" using a strong combination of nachos and tacos. There aren't any bordering countries; due to its wise policies, Rumania neighbours itself. Natural resources are scarce and mostly located in some other remote countries.

Rumanians are still a mystery to scientists. They have furry, smelly and delicate feet. Is seem that for a long time, they used to serve Sauron, nowadays known also as "Lord of the Dance"(that is, before he tried to steal their nachos and tacos; the bloody war that resulted is known as "The War of the Ring"). The major religion amongst Rumanians is orthodoxism, an ancient form of worshiping, half way between Islam and Christianity. The paradox is that, even though they are fervant believers, Rumanians consider that were not the Lord's (whoever might him be) creation, but the spawn of "Decebal" (leader of the Dacia factory) and "Trajan" (the first immigrant to became the emperor of Rome). This is, basically, all we know about Rumanian people.

Rumania has no economy. Their major export is Ramen noodles, a food most commonly eaten by computer nerds and poor people. The people enjoy spending all of their money on women, beer, Sony-Ericsson P800 and Motorola V220. The only treasure of Rumanian people is the "Closca cu puii mei de aur" (as in: "Hen with my golden offspring")... but the Russians locked her in their basement. The Rumanian people listen to a weird series of noises which they call "manele". Most of the people do not understand these sounds but Rumanian people enjoy it very much, and probably a reason to this are nachos and tachos.

In 1756, a bloodless revolution, which ended in some 1,000,000 mutilations, 267.000 infections and a quarter of a million occurrences of malaria - but no deaths - brought to power an anarchist government . This authoritarian regime still rules Rumania even nowadays, mainly because of its dictatorial use of nachos and tacos. As Oscar Wilde once said: "Nachos and tacos are the main causes of oppression in Rumania". Wise words, indeed...

A long, long time ago, in the past few years, a great leader was born. His name was "Harap Alb" (slang for White Arab). He died with a very rare form of illness. We do not know which type was it. He was also called The Great by his close friends, a bunch of tiny guys with some very deranged habits, such as eating all the birds, drinking all the rivers or freezing everything up while sneezing because of the cold they create by themselves.

Another great leader of the peaceful people living on the Hill , by his name Vladimir Draculescu (also known as Dracula), was born in Rumania. He has become most famous for conquering all of Europe, half of Asia, and parts of Africa in less than 4 hours, while picking his teeth with the poles in which he had previously stuck around an unknown number of rich, but rotten nobles, poor and colourful gypsies and workaholic peasant thieves. Vladimir then became the Ruler of the empire which he then started calling by its middle name, 'The Glorious Democratic Empire of Rumania', all the other names having been removed from every piece of historical document ever written up to this moment.

One of the things Rumania is most famous for is its food, made from varying combinations of nachos and tacos.

Destination of the first fake pair of Nike shoes ever produced, a pair of "Air Max 94.5". The shoe went on to found the nation's first and only museum.