“Aren't they the people who came up with the nuclear toaster? That thing is amazing.”

One of the few peaceful programs to be released by Soviet Russia in the early 1970s, the Peoples' Nuclear Program, commonly referred to in the West as the "What Can We Put a Nuclear Reactor Into Today?" Program was the largest social experiment in the history of the Cold War. It lasted from 1972 until 1986, when the headquarters in Chernobyl exploded during the testing of their newest project.

The prototype reactor for the Nuclear AK-47 was intended to be strapped to the back. It also strangely looked like a normal backpack.

The program's first project was to make a nuclear-powered building. This would appear to be rather simple—just hook up a building to a nuclear power plant—but the Soviets had bigger and better ideas. After six months of haggling over how to install shielding around the building's reactor, the project's managers decided "screw it, it'll cost too much anyway," and put the reactor in the basement of the building while adding several lucky charms that they thought would keep away the radiation.

The second project entailed making a nuclear-powered AK-47. Early prototypes of this were hard to carry, as the 100-pound nuclear reactor had to be strapped to the soldier's back. After numerous attempts to reduce the size of the reactor, the management stepped in. The solution was to take a normal AK-47, add a rod of uranium to it, paint it green, and call it nuclear-powered. Not many citizens knew the difference, but when the news was leaked to the Western media, there was a near-simultaneous 5 minutes of hysterical laughter resulting from the news.

A lesser known project was a nuclear sword. While the Soviets claimed that it could cause anything it touched to go up in a nuclear explosion, in reality it was only a regular sword made of uranium. It is unknown why the project even existed, as even the falsified instructions were exactingly specific, and in field testing, the wielder would be shot before even getting close enough to use the sword in combat. 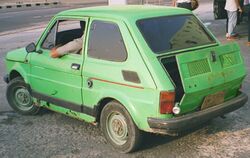 One of the few remaining Lada-N cars.

In early 1976, the Soviet government reviewed the work of the Peoples' Nuclear Program. They were unamused by the project's failures, and resented that the project managers tried to pull a fast one on them with the AK-47 project. The government fired everyone working on the project and sent them to the middle of Siberia in a move unseen since the Stalin era. A new set of scientists were quickly hired, and threatened with death if they didn't come up with a feasible project, and fast. In less than a year, the first nuclear powered car was created. The plans were given to the Lada Company, which dubbed it the Lada-N. It was quickly banned by the Geneva Convention due to concerns that it could be used as a weapon, though the Soviets denied this. This did not deter the Soviets, who released models for the next six years until realizing that nobody was buying them.

With the failure of the Lada-N, the program became the laughingstock of the Western world. Angered by the humiliation, the program's managers pushed themselves to the limit. Within three years, a slew of nuclear-powered home appliances were released into the Soviet marketplace. By far, the most successful was the nuclear-powered toaster. Able to toast 400,000 slices of toast per minute, the toaster was a favorite of Party members and restaurant owners in the country. Critics in the West called it "the most efficient way to poison an entire country." Progress was impeded in creating these nuclear-powered appliances due to an unknown project in the later period of the project.

On April 26, 1986, a nuclear reactor at the Chernobyl plant exploded. The official story is that it was due to operator error and flaws in the plant. However, what is not clearly known is that there was a secret project for the Peoples' Nuclear Program taking place there at that time. It is rumored that this project was the creation of a nuclear-powered child, though there is no concrete evidence of this project.

Evidence for a nuclear-powered child seems to come from scattered observations of what seems to be a superhuman child in its late teens. Powers of this child, dubbed "Iderno," were observed to include flight and some sort of beam that sets things on fire. The governments of the Ukraine, Belarus, and Russia all simultaneously deny this, which must mean that it has some truth.

Whether rumors of a nuclear-powered child are true or not, what we do know is that the Peoples' Nuclear Program was shut down essentially as soon as word got to Moscow of the meltdown. In fact, the program was not only shut down, but the evidence that it ever existed was burned. Only one copy remains, and it is currently locked away in a bunker deep within Siberia. The nuclear-powered toasters were not confiscated, and several are still in use across the deep reaches of Russia in whatever their equivalents to truck stop restaurants are. No relation between consumption of nuclear toast and nuclear radiation has yet been found. 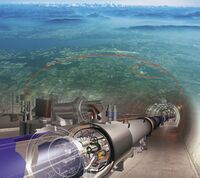 The Large Hadron Collider is an example of a modern piece of scientific research which in reality was made as an excuse to play around with nuclear reactors.

Recently, China and Cuba have begun developing their own programs similar to the Russian model of adding nuclear power to random objects. The Chinese program is the less successful of the two, but is slightly more ambitious than the Cuban program. North Korea is rumored to be considering its own program, despite Western pressure.

China's program (我爱核武器, or Peoples' Republic of China Nuclear Program for those of you who can't read scribble-language), founded in 1996, has taken a completely different tack from the Soviet objects and has worked almost exclusively on creating nuclear food and utensils, hoping that this will help feed their growing population. They have created several prototype pairs of nuclear chopsticks, though the reactor size is again cumbersome. Work has also begun on a nuclear pork dumpling dish, with a side of nuclear rice and a nuclear fortune cookie.

The Cuban program (Programa Nuclear de las Gente), founded in 1985, already has several successes under its belt, the most notable of which is the nuclear cigar. Nuclear cigars can be bought across Cuba, and Fidel Castro has said, "these by far are the best cigars I've ever smoked," which was succeeded by a 20 minute coughing fit. American health officials have declared the cigar to cause more lung cancer with just one cigar than "two weeks of rolling around in radioactive asbestos." There are reports of work beginning on a nuclear raft, though the government vehemently denies this and blames the black market.