From Uncyclopedia, the content-free encyclopedia
(Redirected from Patented nonsense)
Jump to navigation Jump to search 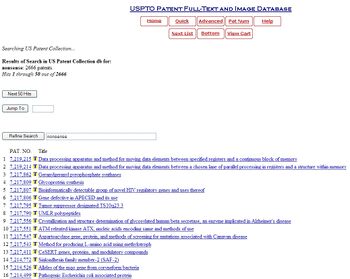 The U.S. Patent and Trademark Office (USPTO) documents over 2500 examples of patented nonsense in their records.

Patented nonsense refers to nonsense which has been officially patented. It is considered to be Uncyclopedia's primary literary style. It was not until 1745 that the British Patent Office opened its Trifles Division, which was expanded at the request of George III in 1784 to cover minutiae, miscellaneous fripperies, and such devices lacking the coherence as to fall within the purview of the Office proper.

For nonsense to be patentable, it should fulfil various legalistic criteria:

Upon fulfilling these criteria, nonsense is recognized by the Patent and Trademark Office by the conferral of Letters Patent of Invented Nonsense. This effectively prohibits others clever (or insane) enough to have independently thought of the same idea from applying that idea anywhere in the useful arts or sciences for a period of twenty years.

Legitimate technological progress is slowed or halted by lawyers arguing over nonsense and the ownership thereof. Enough skilled lawyers can halt all scientific advance outright, as each bit of patent nonsense inevitably depends on some other piece of vaguely-related, patentable nonsense which preceded it.

Some particularly firm beleivers in patented nonsense amongst the lawyerly profession have extended the concept to the point of patenting genetics (in order to halt the unauthorised reproduction of the dodo bird, for instance), patenting software or even patenting mathematics.

is not patentable as it is already part of the prior art, but with sufficiently costly legal counsel skilled in the principles of patent nonsense,

may be patented and serve as the bone of contention for evil and criminal litigation for years to come.