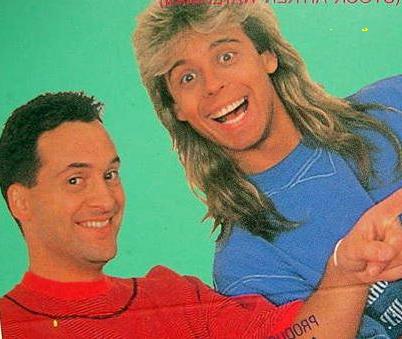 Cocaine is a hell of a drug!

For those without comedic tastes, the so-called experts at Wikipedia have an article very remotely related to Pat and Mick.

Pat and Mick were a British vocal duo consisting of popular radio personalities Pat Sharp and Mick Brown. A legendary UK chart topping pop-duo, the duo enjoyed massive success during the early-1990s with hits such as "Lets All Chant", and "Ooh Ooh, Nice Nice".

Pat and Mick: The Early Days[edit]

We can trace Pat and Mick back to the early days of pirate radio when they first met back in 1976, having both been simultaneously turned down flat as a pancake by BBC Radio 1 for the position of disc jockey, in favour of emerging punk/new wave DJs, such as Tony Blackburn. It was during these wilderness years that they decided to tour tube stations of the London Underground, busking impromptu "radio shows" for passers by at evening rush hour. The set up was very basic back in those days. A small painting and decorating table with a hand wound, gramophone record player, megaphone and cassette tape recorder, with which to play their sponsored commercials. Londons commuters soon found themselves stopping in sympathy, and perhaps tapping their feet to some of the most modern pop music ever to be heard. It wasn't lond before the lads had a dedicated following, known simultaneously as The Patters and The Mickers (on Mondays only). Their sharp image and big success quickly earned them the nickname of les enfant terrible des pop-musiques around London.

Pat and Mick: The Glory Years[edit]

It wasn't long though (approximately just 15 years) before the music industry started to take notice of the boys, and sure enough legendary rock producer Pete Waterman saw one of their legendary underground radio performances at Old Street tube station. On top of giving the lads a shilling for a cup of tea, he also produced a record contract and launched their pop career with the Smash Hit number one "I Haven't Stopped Dancing Yet", dedicated to Rick Astley. It should be noted at this stage that News Of The World rumours of sexual favours given to rock band Stock, Aitken and Waterman in exchange for their tour support slot are 100% possibly not true. Their initial success was immediately followed by the seminal "Let's All Chant", an authentic 1970s disco hit composed by Pat on the back of cigarette packet in 1987. The lads went on to release 15 consecutive number ones, reaching the top of the charts simultaneously in 293 countries across the globe.

Pat and Mick: Back into Obscurity[edit]

Having guaranteed their place in the annals of pop-history, Pat and Mick took the regrettable decision to release a string of records, culminating in the top 100 smash hit ballad "My Mullet". Rumours were rife of "musical differences" in the Pat and Mick camp. And finally Mick Brown admitted that his hairline had receded too far to remain a convincing pop star. Meanwhile the Patters (and on Monday only, The Mickers) fanbase drifted off towards the emerging pop phenomena of Take That. Pat now has a regular slot as an MC at the Gala Bingo hall, Leyton. Mick, on the other hand is now operating a mobile fast food business on the A3 and can be found plying his trade in laybys between Guildford and Wimbledon.

Was Pat and Mick the first gay couple?[edit]

No, that would be Asterix and Obelix.