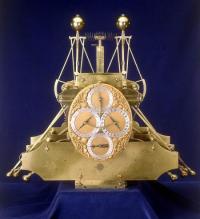 Highly sensitive measurement devices are used to calculate the exact duration of a parsec.

“This is going to take a while.”

“I'm about one parsec from fucking burying that guy.”

“When it comes to sex, I can last way longer than 12 parsecs.”

A parsec (or par-second) is a unit of time, equivalent to the average time it takes one second to travel one centimeter in a vacuum. There are approximately 31,536,000 parsecs in a light year, give or take a few depending on how fast light is traveling in your vacuum's event horizon.

The parsec is used to measure the time taken to complete a given leg of an interstellar journey. For instance, fourteen parsecs is considered a good time to complete the Kessel run, and any time under twelve is superb.

A common error is attempting to use the parsec as a measure of distance instead of time. This unfortunate misuse dates back to a misinterpretation of the Bible, where the journey from Nazareth to Bethlehem is described as "A Parsec's Journey". Foolish scholars assumed this meant the distance between these cities defined a unit of length, while upon further review it was determined that this was just how long it took Jesus to teleport from one to the other.