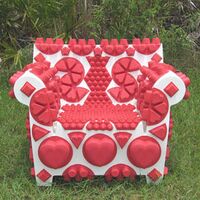 Obnoxious Plastic in the wild.

Originating from the Latin obnoxiōsus ("hurtful, injurious, and dangerous") and the Hollywood plastic ("new breasts, new nose, Joan Rivers"), Obnoxious Plastic is a valuable and versatile material that has been used in many products since the 1950s. It is most recognised for its chronic lack of aesthetic value.

Obnoxious plastic was first synthesized by Andy Warhol in the late 1961 using a Flux Capacitor and three sticks of a dynamite. He discovered that it existed in four dimension which made it really hard to draw. This also explained how it replaced the gold standard for six months in 1893 despite not having existed yet.

In the 60s, obnoxious plastic was used in the Apollo project where it caused the failure of the first 40 some odd attempts, including Apollo 13.

Obnoxious plastic is created by the polymerisation of six Marmite molecules and one whole egg yolk. The process is facilitated by the aerobic combustion of a metric table spoon of nutmeg (if nutmeg cannot be found cinnamon or paprika can make a viable substitute). Lightning can be used as a catalyst and is often necessary for bulk polymerisation. For this reason Obnoxious plastic industries often work in tandem with discombobulated corpse resurrection and other acts of God defiance.

Elements in use in this molecular formula are:

It has no proven isomers, although some religious chemistry fanatics claim it is a direct isomer of God, thereby making it the chemical form of pure evil. Attempts to recreate God in laboratory conditions in order to prove this theory have been till now unsuccessful. 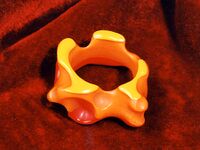 Because of the high speeds and rate of finger licking goodness required to melt Obnoxious plastics, it is difficult to form appealing shapes. It can become malleable however with the calculated application of beatings. When the plastic has been significantly drained of will (or intermolecular forces as so called 'scientists' refer to it) it becomes submissive plastic or play-do, a poisonous yet fun substance suitable for children of all ages.

Problems occurred when intellectual quacks discovered that products made out of obnoxious plastic released obnoxious plastic vapours into the atmosphere. This alone wasn't such a problem, the harmful effects were limited to only 80% of children and the symptoms limited to hideous mutation and complete nervous system collapse. However across the country side of many country sides in the northern hemisphere, strange amorphous Obnoxious Plastic Cysts (OPC for short) have started appearing. They can be large, about the size of a pile of burning cattle. They have been reported as moving around with ill intent when no ones looking and local farmers have called them "a queer sort" and have related there fear of them to about the same as a loud tourist. 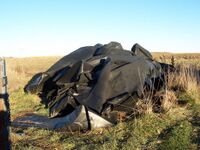 An 'OPC' in it's natural habitat

While North America was the worst hit area by far, they have already labeled OPCs as endangered species until there numbers grow beyond the ability to destroy them. Scientists at Grange Hill University have discovered that although the creatures aren't hard to kill, they can be stunned by a shot between the shoulder blades by a BFG9000 (a large fictional weapon) or a shot from the death star (a very large fictional weapon) on any part of the body. Though they admit that this research is unprovable and useless. Irish Minister of Agriculture Christie Mahon disagrees, and has already begun stock piling fictional weapons, for the purposes of capturing and farming OPCs for their delicious milk.